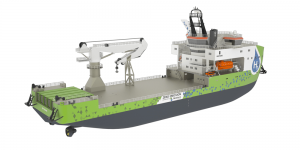 The Norwegian shipbuilder Ulstein has presented the concept of an offshore construction vessel with hydrogen propulsion. The Ulstein SX190 will be tested on the high seas from 2022.

The Ulstein SX190 Zero Emission DP2 construction support vessel can cater to a large variety of offshore operations such as the construction of offshore wind turbines. The DP2 is Ulstein’s first hydrogen-powered offshore vessel and is equipped with fuel cell technology from the Dutch specialist Nedstack. With the current technology, the ship can already operate without emissions for four days. In the near future, expected developments in hydrogen storage and fuel cell technology should make this possible for two weeks. A diesel-electric drive is also installed for longer missions or transfer journeys.

“With this hydrogen-fueled vessel, we aim for future zero-emission operations of long endurance,” says Tore Ulstein, Deputy CEO of the Ulstein Group. “Sea trials of a newbuild Ulstein SX190 Zero Emission could happen as soon as 2022.”

The fuel cells have a capacity of 2 MW, the total installed capacity of the drive is 7.5 MW. The PEM fuel cells supplied by Nedstack are installed in a separate engine room. Nedstack systems have already been built and tested in the multi-megawatt range.

The special feature of the so-called erection or installation ships is that they must maintain their position as accurately as possible during work, regardless of weather conditions, currents and waves. This “positioning load” leads to a fluctuating power requirement that can be better covered by electric motors.

The Norwegian project is not the only attempt to make installation ships cleaner. The Finnish technology group Wärtsilä announced in August that it would convert the Acta Centaurus to a hybrid drive. This will reduce CO2 emissions by up to 15 per cent. However, if the Ulstein SX190 were to refuel with green hydrogen, its CO2 footprint would be significantly lower.

Also working on fuel cell systems for large ships is the fellow Norwegian company Havyard group. Earlier this month the company announced that it is entering the approval phase with Linde Engineering as tank supplier and PowerCell Sweden as fuel cell supplier. The aim is to create an emission-free system based on fuel cells that meets the requirements of the IMO (International Maritime Organisation) for maritime safety.