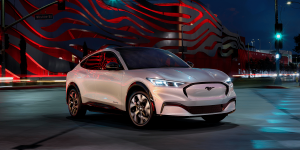 According to insider information, Ford wants to sell 60 per cent of the electric SUV Mustang Mach-E produced in the first year in the EU. Of course, the reason for this is the local fleet limits that Ford wants to meet with the sale of electric cars.

The figure was cited with reference to an insider source at Ford. It should, therefore, be taken with a grain of salt, but another detail regarding the Mustang Mach-E, on the other hand, is considered confirmed: In the first year of production, the US carmaker is planning only a total of 50,000 units of the Mustang Mach-E due to the still lacking availability of batteries. This is what automotive journalist Ian Thibodeau claims to have learned from Joe Hinrichs, head of automotive at Ford.

Assuming this production volume, around 30,000 vehicles would be delivered to the EU and around 20,000 cars would remain in the USA with the 60 per cent share mentioned above. However, there is no confirmation from the manufacturer for these figures. It is also unclear how the vehicles will be allocated to the individual markets. While Ford is based in the US, which would ease delivery logistics, the EU’s more strict environmental regulations are seemingly pushing Ford to prioritise the European market.


Ford had announced its electrification strategy for Europe in April, but almost only listed hybrid vehicles – and at the IAA in September Ford primarily showed hybrid models. Already at that time, only the electric SUV (the Mustang Mach-E) announced for 2020 and the electric version of the Transit for 2021 were named as fully electric cars. In other words, in the short term, the Mach-E will be Ford’s only battery-electric car in Europe. And if this one model is to make a significant contribution to reducing fleet emissions, it must be available in corresponding quantities.

Effective July 1, Ford Europe will split into three divisions: Passenger Cars, Commercial Vehicles and Import Models. The Mustang Mach-E will, of course, be assigned to the import models, the electric transit will be a commercial vehicle. The development for the European passenger cars, including battery electric models, was bundled in Cologne-Merkenich in the course of the restructuring. However, it will be a few years before the announced “family of battery electric vehicles” is produced in Europe.

Back to the USA: InsideEVs made an interesting comparison for the allegedly planned 20,000 units. At 1,650 vehicles per month, the Ford Mustang Mach-E would settle at about the level of a Chevrolet Bolt (1,500 vehicles). The Audi e-Tron quattro with about 600 vehicles per month and the Jaguar I-Pace (200 vehicles) are significantly lower. However, the Tesla Model 3 has 12,500 units per month in the USA.

According to Hinrichs, these figures only apply to the first year of production. He did not specify how long the production will remain limited due to the low battery availability – and of course to which value Ford wants to scale the production of the Mach-E afterwards.

Audi increases efficiency in the e-Tron