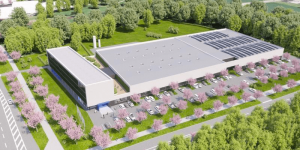 About one year after the takeover by the Japanese Horiba Group, the battery and fuel cell specialist Horiba FuelCon is expanding its production site in Barleben, Germany. 250 new jobs are to be created.

By the end of 2021, approximately 30 million euros are to be invested in a new building in the Ostfalen Technology Park in Barleben, increasing the number of employees from the current 110 to 360. The new building will strengthen the company’s role as a global competence center within the Horiba Group and also advance the planned e-mobility campus. The planned office space is 3,000 square meters and the production area 7,000 square meters. “This makes us not only technologically future-proof, but also a strong employer in the region,” says Managing Director Ingo Benecke.

Horiba FuelCon – previously known as FuelCon until the takeover last year – manufactures test, manufacturing and diagnostic systems for fuel cells and batteries. In other words – products that are currently in demand in the automotive and supplier industries. “The increasing demands on vehicle manufacturers to reduce CO2 and pollutant emissions are encouraging the automotive industry to invest in battery and fuel cell technology,” says Atsushi Horiba, CEO of the Horiba Group. “Demand is growing to such an extent that we will expand our plant to meet it.”

As expected, Saxony-Anhalt’s Economics Minister Armin Willingmann (SPD) is pleased with the investment and the planned 250 new jobs. “The upheaval in the automotive industry not only entails risks, but also great opportunities that we must seize,” says Willingmann.

The University of Magdeburg is also building a “Center for Method Development” in the Ostfalen Technology Park. Together with Horiba FuelCon, IKAM GmbH and IGZ, the “E-Mobility Campus” will provide an attractive environment for companies and qualified employees.

Horiba has now completed, commissioned and expanded different buildings within its manufacturing ecosystem. The company has commissioned its plant in Magdeburg-Barleben in Saxony-Anhalt. The company building, named eHUB, in the Technologiepark Ostfalen in Magdeburg-Barleben is the new headquarters of the subsidiary Horiba FuelCon, which manufactures testing, production and diagnostic systems for fuel cells and batteries. In addition to 7,000 square metres of production space, the eHUB has around 3,000 square metres of office space.

With the opening at the end of April, there was a delay of around four months in the project – the original plan was for the end of 2021. But when the expansion of the Barleben site was announced in November 2019, the Corona pandemic with all its global implications was not yet foreseeable.

In addition, the expansion of the site in Leichlingen (North Rhine-Westphalia) was also completed. Horiba FuelCon invested a total of 36 million euros in both projects.

“Our investment in both site expansions is a milestone for our further growth,” says Robert Plank, President of Horiba Europe GmbH. “It is the answer to the increasing demand from vehicle manufacturers to reduce emissions, the rapidly growing importance of a clean energy supply for energy-intensive industries such as the chemical or steel industry and the increase in environmental monitoring technology to measure pollutants.”