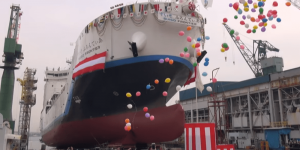 The vessel called Suiso Frontier will transport liquefied hydrogen at 1/800 of its original gas-state volume, cooled to –253°C, safely and in large quantities over long distances by sea. Kawasaki will equip the hybrid ship with a 1,250 m3 vacuum-insulated, double-shell-structure liquefied hydrogen storage tank. The tank is currently being manufactured at Harima Works and will complete the vessel’s construction by late 2020.

At the source of hydrogen, Australia is a country more known for its fossil-fuel related problems rather than solutions. The vast country and continent has been making headlines either for suffering climate change with catastrophic fires and simultaneously being the world’s largest exporter of coal. Nevertheless, some Australians are quietly celebrating the year 2019 for crystallising opportunities that could lead Australia towards being a renewable hydrogen superpower.

Japan and South Korea are known for their support of the hydrogen economy, each with their own governmental and industrial policies in support of hydrogen vehicles and technology. These two countries have recently emerged as supporters of Australia’s emergent renewable hydrogen industry. Australia’s endless wave, wind and solar resources give it a clear advantage over most other countries looking to enter the renewable hydrogen race. Australia’s recently released National Hydrogen Strategy estimating that by expanding a clean hydrogen industry, Australia could dramatically reduce its fossil-fuelled energy imports and vastly expand its clean energy exports.

However, despite the seemingly distinct advantages of divesting in fossil fuels and investing in renewables for Australia given the most recent climate disaster, there is some dissonance among those supporting the hydrogen economy. While political will for transitioning Australia’s energy industries and systems remains inadequate, many view renewable hydrogen as an opportunity to break with the country’s fossil-fuelled past and to seize a leadership role in the global renewable energy transition. At the same time, other hydrogen proponents even view ‘clean hydrogen’ as a lifeline for Australia’s coal and gas industries. They insist that hydrogen derived from coal and gas with carbon capture and storage is ‘clean’.

While Australia is just involved enough to participate and Japan proving to be an eager customer, what is very clear is that this diesel-electric hybrid carrier ship will be transporting hydrogen created from brown coal as the derivative energy source. However, on their dedicated website, Kawasaki lays out their “Hydrogen Road” which seems to follow both grey (derivative energy from fossil fuels) and green hydrogen (hydrogen created from entirely renewable sources).

In their press release regarding the launch of the hybrid carrier ship, no further information is given about the power ratio of diesel and electric propulsion or any other information about the ship’s systems. Longer shipping routes are indeed a challenge in the transition off fossil fuels. Other ship-makers are looking at hydrogen technology for heavy-duty sea vessels. Just last month the Norwegian shipbuilder Ulstein presented the concept of an offshore construction vessel with hydrogen propulsion. The Norwegian Havyard Group is also working with partners on a fuel cell system for large ships and is now entering the approval phase with Linde Engineering as tank supplier and PowerCell Sweden as fuel cell supplier. Kawasaki and others will have to wait or develop their fuel cell ship propulsion systems to deliver hydrogen for other vehicles and power requirements. This ship it seems is more on testing and developing hydrogen export pathways.

In their press release about the hybrid carrier ship for hydrogen, Kawasaki uses the claim “Building an International Hydrogen Energy Supply Chain Aimed at Carbon-free Society.” Although this supply chain is by no means carbon-free yet, many of the elements emerging hold foreseeable growth.