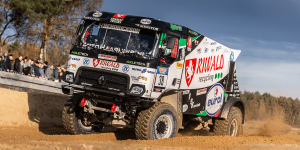 ZF has developed a hybrid driveline for the Dakar Rally with MKR Technology that was recently launched. The CeTrax Lite RS e-drive is used in the four-wheel-drive truck of the Riwald-Dakar team.

In the rally truck, which is based on a Renault C640, the drive is to provide an additional 80 kW continuous power, 150 kW peak power, and 1,400 Nm torque. For rally use, the prototype of ZF’s central electric axle drive has been redesigned both in terms of hardware and software, as the supplier revealed.

For safety reasons the Dakar Rally has not been held in North Africa for years, after several events in South America the event will be held in Saudi Arabia in 2020. Riwald’s truck is the only hybrid vehicle in the entire field of participants with cars, trucks and motorcycles. In the car field, hybrid pioneer Toyota will compete for victory, but the Hilux used in the rally is only powered by a five-litre V8 naturally aspirated engine – without electric support.

During the first test drives, however, the team was convinced by the new drive, the hybrid truck was a few seconds faster than other vehicles. One of the reasons given for this was recuperation. This allows the driver to apply the brakes later and harder, thus driving the truck at the limit for longer. “The components simply work with each other in perfect harmony”, says Mario Kress, chief designer and owner of MKR Technology. “We’re excited about how quickly and effectively the CeTrax Lite RS boosts the truck’s performance.”

The asynchronous motor gets its energy from a 400-volt battery, ZF has not given details of its capacity. The challenge, apparently, was to adapt the 13,000 revolutions of the electric machine to the 2,700 revolutions of the 735 kW diesel engine. A new transmission ratio was developed for this purpose. In addition, the power electronics as well as the hybrid control unit were programmed especially for the Dakar Rally.

“The extreme conditions of the Dakar Rally – lots of sand and rough terrain – offer us a unique and amazing opportunity to subject our hybrid driveline to the ultimate acid test,” says Ralf Boss, Director of Special Vehicle Systems at ZF. The supplier sees “series potential in other demanding applications with special vehicles” in the technology.