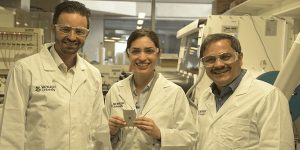 Researchers at Monash University in Australia say they are close to commercialising the world’s most efficient lithium-sulfur battery. It could give electric cars a range of more than 1,000 kilometres and smartphones a runtime of five days.

According to the university, the rechargeable battery could “more than quadruple the performance of the current market leader,” thanks to a new cathode design. The researchers have applied for a patent for their manufacturing process.

Prototype cells were manufactured by the German research and development partner Fraunhofer IWS in Dresden. The Dresden researchers also confirm the fundamental potential of lithium-sulfur technology but warn against high hopes for its early commercialisation. Although the technology is very promising, it is still under development. “First applications are seen where low weight is a concern, for example in aviation,” said Holger Althues, head of the department of chemical surface and battery technology at the IWS, who has been researching the technology with his team for a number of years. Lithium-sulfur cells can store more energy at the same weight as lithium-ion batteries but are larger.

The advantage of lithium-sulfur batteries is that they are significantly lower in cost and weight. In such cells, the cathode consists of a mixture of sulfur and carbon and replaces the previously predominant cathodes made of nickel, manganese and cobalt. “This opens up the potential for a low-cost cell: Unlike nickel and cobalt, sulfur is a waste product and available worldwide,” says Althues.


But this technology has not yet caught on because of difficulties with the stability of the cathode. During charging and discharging, the cathode expands (or contracts) much more strongly, causing fine cracks in the material and thus increasing wear. The Australian researchers around Mahdokht Shaibani are now developing a particularly robust sulfur cathode.

This involves embedding the sulfur in a mixture of the binder sodium carboxymethyl celluloses (Na-CMC) and carbon, as the researchers write in the US journal Science Advances, among others. This layer is should compensate for the mechanical loads and thus reduce the loss of the cell’s performance and capacity over its service life. Power densities of more than 1,200 mAh/g are expected to be possible – at least already in pouch-design cells commonly used in the automotive industry, but still on a laboratory scale.

“This approach not only favours high-performance metrics and long cycle life, but is also simple and extremely low-cost to manufacture, using water-based processes, and can lead to significant reductions in environmentally hazardous waste,” emphasized Monash researcher Matthew Hill. Over 200 charging cycles, the lithium-sulfur cell has hardly lost any power – with an efficiency of 99 per cent. The first test batteries are to be integrated into cars and solar parks this year.

Despite these breakthroughs, there is still a lot of work ahead for researchers and later also for series developers. For use in electric cars, the charging cycles would have to be increased to several thousand. In a recently filed patent, Tesla assumes 4,000 charge cycles for the new cells – but still based on NMC cathodes.