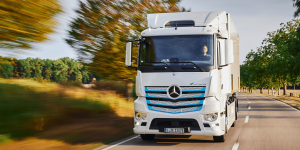 Daimler Trucks has announced a new all-electric truck called eEconic. It is based on the Mercedes-Benz eActros and is designed as a waste collection vehicle. Series production is scheduled to begin in 2022.

However, customer testing of the eEconic for municipal use is to begin in 2021. The experience gained from this test deployment will then be incorporated into the final production model, as Daimler writes in a memo on the new electric truck.

Daimler Trucks does not provide any information on the technical data, it only states that the eEconic “will initially be offered in the 6×2/N NLA configuration”. Whether and what changes will be made to the eActros is therefore open. Daimler had initially presented the vehicle in 2018. The eActros is driven by two electric motors, each with 125 kW output, and the battery capacity was specified as 240 kWh. The official range of the eActros is 200 kilometres. However, the eActros used so far are pre-series vehicles undergoing field trials, with series production scheduled to start in 2021.

In the eEconic, such a range should be sufficient for a complete day tour. According to the announcement, Daimler expects “comparatively short and firmly planned routes of up to about 100 kilometers with a very high stop-and-go proportion,” which would make battery-powered trucks very suitable for urban use in the waste disposal industry.

Mercedes mentions some changes to the eActros, but they do not affect the drive system. For example, the cab in the eEconic has been positioned lower than in the familiar long-distance truck, and the passenger door has been glazed – both of which are intended to improve the driver’s visibility, for example of cyclists or pedestrians standing next to the truck. The turn-off assistant is also intended to provide additional assistance to the driver. The driver and crew get in and out of the vehicle using just two steps on the side facing away from traffic, which is intended to make getting out of the vehicle safer.

“Thanks to its application profile, the vehicle is ideally suited for electrification due to its application profile, for example in waste collection with stop-and-go traffic and plannable daily tours,” says Ralf Forcher, Head of Marketing, Sales and Service, Mercedes-Benz Special Trucks. “It combines two important features, especially for use in urban areas: It is locally emission-free and very quiet.”

The advantages of an electric truck for municipal waste disposal operations have not only been recognized by Daimler. Volvo Trucks has developed the FL Electric for this purpose, which is designed both as a refuse truck, but also for urban delivery traffic in a different configuration. Sales of the FL Electric have already started in some European countries, and series production is scheduled to start in March.