In the first phase of the pilot project, nine of the total of twelve pillars are permanently connected to the power grid, while three others will be mobile and be used for example at major events. In addition to AC charging, DC charging of up to 100 kW will also be possible at the charging points. During the test phase, charging will be free of charge for drivers of BEV and PHEVs from all manufacturers, as the Group states in a press release.

The charging point was developed in-house by Volkswagen Group Components. The column contains a battery pack made of recycled cells that were previously used in an electric car. With this buffer storage, the charging point can enable DC charging with up to 100 kW, even if it is only connected to the low-voltage grid – the battery is slowly recharged from the grid while the charging current for the cars is drawn from the battery. The advantage is that the expensive connection of the columns to the medium-voltage grid is not necessary. The disadvantage, however, is that it is not possible to charge several cars one after the other at full power – if the buffer battery is empty, the charging power drops. 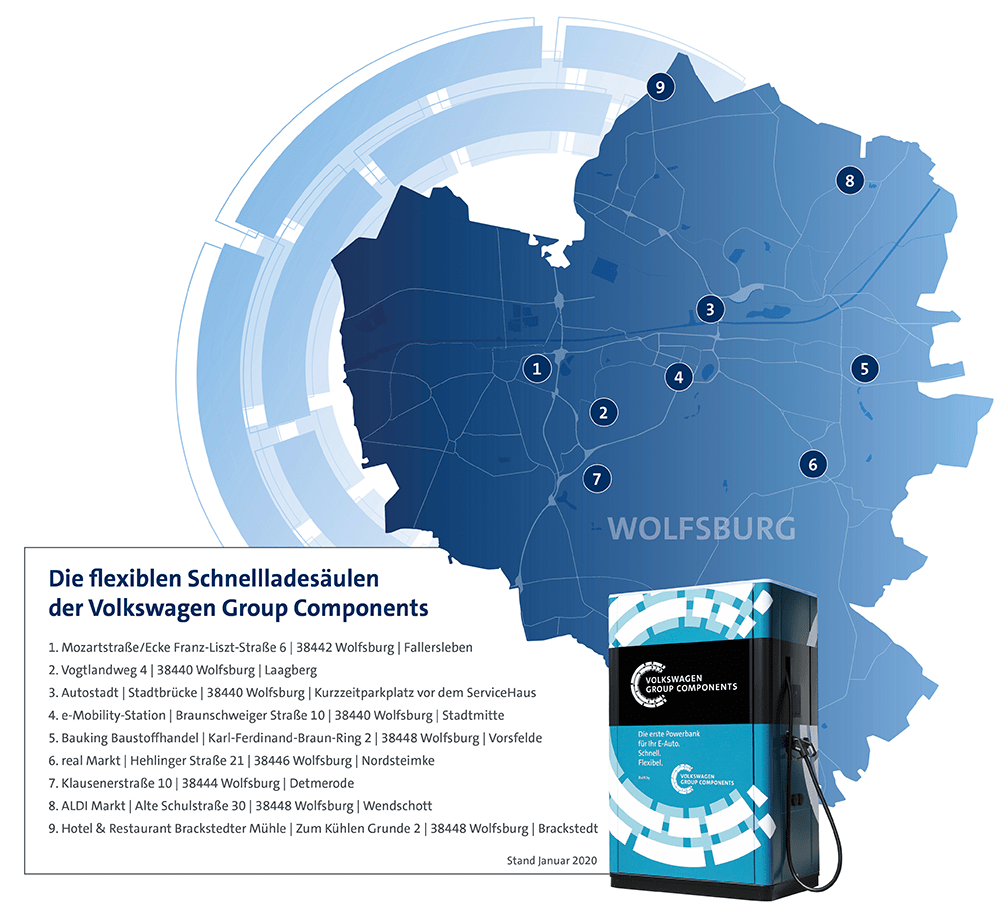 VW does not currently provide any information on the cost of a charging station. Nor does the notification indicate how much the installation costs for this type of quick charging station are. Photos only show that the “mobile” columns, which are permanently connected to the mains, are mounted on a concrete base.

VW had already announced the project with the twelve mobile quick chargers in July 2018. “A comprehensive charging infrastructure in urban areas is one of the essential steps towards an e-mobile future,” says Thomas Schmall, Chairman of the Board of Management of Volkswagen Group Components. “The flexible charging station we have developed is an important building block for a functioning network of charging points.” In the future, the locations of the mobile charging points will be accessible via the City of Wolfsburg’s own planning tool.

The expansion of the charging infrastructure at VW locations in Germany is also making progress. As the Transparent Factory announced on Twitter, 30 charging points are to be set up in the visitor car park by May. It is to become one of the largest charging parks in Saxony. In total, the company had announced that 4,000 charging points would be set up at the ten German locations by 2025 – primarily in the employee car parks, but also partly open to the public.