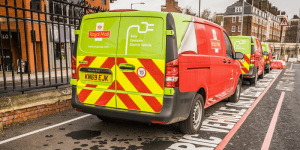 The British postal service Royal Mail is introducing 87 new electric delivery vans into London. The new vehicles are a mixture of the Mercedes-Benz eVito and Peugeot Partner Electric models, 30 of which are already in operation.

The rest of the new e-transporters are to follow in the next two months. The electric panel van from Peugeot will have a loading space of 3.7 cubic meters, while the larger Mercedes will have a capacity of up to 6.3 cubic meters. The ranges of the two models are between 149 and 190 kilometres, which should be sufficient for delivery operations “at selected locations in the capital and surrounding areas”.

When the 87 electric vehicles have been delivered, the electric share of the fleet of the Mount Pleasant postal centre will be around 40 per cent. To ensure that the new battery-powered vans are also recognisable as such, they have been painted or foil-coated in red and green instead of the typical red.

For the electric vehicles, Royal Mail has converted the postal centre and now operates one of the largest charging infrastructures for commercial electric vehicles in London, consisting of wall boxes and floor-mounted charging points. While the Peugeot is also equipped with a CHAdeMO connection for DC charging, the eVito only supports AC charging.

“As a Company, we are committed to making changes to our operations that reduce our environmental impact, while ensuring we continue to meet customer expectations,” said Paul Gatti, head of the Royal Mail fleet. Currently, the entire fleet comprises 41,500 vehicles, but the number of electric vehicles is still in the three-digit range.

Besides electric vans, Royal Mail began trialling electric cargo trikes in Essex  in March last year, and introduced 190 electric delivery vans a few months later, but has yet to really rise to the challenge of decarbonising its rather larger fleet of polluting vehicles.

Update Thursday 30 January 2020: Royal Mail has concluded a three-year framework contract with EDF for the charging infrastructure. EDF has been contracted to provide charging points, associated maintenance and ancillary items such as signs, bollards and wheel stops. Chargers will be installed on Royal Mail Group sites in the South East of England.