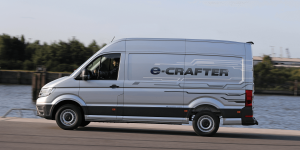 Volkswagen Commercial Vehicles (VWN) will deliver a total of 420 e-Crafter electric vans to the French logistics company Chronopost over the next two years. After extensive testing, the subsidiary of the French Post Group has decided in favour of the e-Crafter.

For VWN, this is the most extensive single e-Crafter order to date. In Germany, smaller fleets have already been deployed: Parcel service provider GLS Germany relies on eight e-Crafter in Düsseldorf. Besides, the transporter is currently in use for six companies of the bakery guild in Munich and Landsberg and several German city centres as part of the ZUKUNFT.DE project.

But back to France: Chronopost made a commitment to clean city logistics a number of years ago. Since September 2019, the company has been making its deliveries throughout Paris exclusively with a fleet of alternatively powered vehicles as reported. From June 2020, this principle will be extended to more than 18 cities in France. “The introduction of a city fleet of 100% clean vehicles is an obligation for us and a strong investment in the future”, comments Chronopost President Martin Piechowski. Electric vehicles now had sufficient autonomy to be used on a large scale throughout France.

For Volkswagen Commercial Vehicles, the order from the neighbouring country represents a new record order. “This is the largest single e-Crafter order from a fleet customer to date and another important step towards sustainable transport solutions for urban centres,” said Heinz-Jürgen Löw, Member of the Brand Board for Sales and Marketing, at the signing of the contract at the company’s headquarters in Hanover.

The e-Crafter electric delivery van has the following technical data: With an output of 100 kW, 35.8 kWh battery capacity, a combined range of up to 115 kilometres according to WLTP and a maximum speed of 90 kph, the e-transporter is designed for city logistics. As far as payloads are concerned, it is designed for up to 998 kilograms or 10.7 cubic metres of cargo space. According to VWN, the combined power consumption, according to WLTP, is 29.1 kWh per 100 km. Since the e-Crafter shares a lot of technology with the e-Golf, it is also called “e-Golf in van format”. More details about the model can be found here.

>> With reporting by Cora Werwitzke, France.