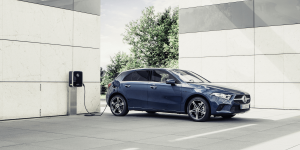 Mercedes-Benz has started production of the plug-in hybrid versions of the A-Class at its compact car plant in Rastatt. However, Mercedes does not specify when the vehicles will be delivered to customers.

In the A-Class, Mercedes is bringing the PHEV drive in two body versions, the compact car and the saloon. Production is now to be started in parallel for both models. “By simultaneously launching production of two A-Class plug-in hybrid models, the Mercedes-Benz Rastatt plant once again demonstrates its enormous flexibility and efficiency in the Mercedes-Benz Cars global production network,” says Jörg Burzer, Member of the Board of Management of Mercedes-Benz AG, responsible for Production and Supply Chain Management.

The PHEV versions will be assembled on the same line as the conventional internal combustion models. This will allow Mercedes to better utilize production capacity and, since the vehicles are manufactured by the same team, to ensure consistent quality.

The technical changes to the two PHEV models compared to the internal combustion models are relatively large. Since Mercedes installs a larger battery of 15.6 kWh than in most other compact PHEVs, the drive battery mounted under the rear seat “blocks” the usual path for the exhaust system towards the rear. The exhaust is located centrally under the car floor, the rear silencer was packed into the center tunnel. In addition, the fuel tank was moved into the installation space of the axles. According to Daimler, this means that the A 250 e has “only slight restrictions on the boot volume compared to its non-hybrid sister models”.

Prices for the A 250 e start at 36,943.55 euros, while the sedan costs at least 37,300.55 euros. Both models have been on advance sale since August 2019. However, Mercedes does not disclose when the first vehicles from series production will be delivered to customers in the current announcement.