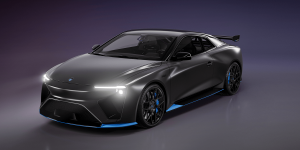 Gumpert Aiways has announced the start of production for the first series model with methanol fuel cell. The First Edition of the Roland Gumpert Nathalie is a special edition with lavish equipment and special paintwork offered at a price of 407,000 euros.

The first vehicles should be available from the first half of 2021. This delays the market launch of the small series. In November it was still said that the First Edition could be delivered this summer.

After the presentation of the RG Nathalie electric sports car concept with methanol fuel cell in 2018, Roland Gumpert presented the series version of the methanol fuel cell in November 2019 at the Asian import trade fair CIIE. According to the company boss, this core component supplied by Blue World Technologies will enable the vehicle to travel around 1,000 kilometres before it needs to be refuelled in three minutes.

In comparison to the study presented in 2108, the series version of the Nathalie now being presented has been noticeably modified in a number of places. The proportions have been refined and the front and side lines sharpened. Four-wheel drive and a tubular frame with a roll cage are intended to make the Nathalie suitable for the racetrack. In addition, organic lightweight materials such as flax will be integrated and Gumpert even promises to use up to 50 per cent of this material in the First Edition.

The methanol fuel cell installed in the series model is a 15 kW model. The energy capacity of the overall system – fuel cell with a 65-litre menthol tank and buffer battery – is to be 178 kWh. This is a little less than was announced at the fuel cell presentation a few weeks ago. Back then the talk was of a 70-litre tank and a total capacity of 210 kWh; values that would guarantee the 1,000-kilometre range. In the above video, the company based in German car carmaking town of Ingolstadt mentions a somewhat more moderate 850 kilometres as the range of Nathalie series. In addition, the vehicle has supercar-like acceleration getting to 100 km/h in 2.5 seconds and, thanks to two synchronized 2-speed transmissions, reaches speeds of up to 300 km/h.

For the first time, Gumpert now also gives details of the “simple solution for methanol supply”, which he first announced at the presentation of the concept car in 2018. The supply is free of charge for customers in the first year after delivery. “An overnight delivery service has been installed for the exclusive customer base for Germany, Austria, Switzerland and is currently being expanded throughout Europe. The North America and Middle East regions are also currently being developed. Organisation and sales are handled by the field marketing specialist FMS as part of the internationally active Advantage Smollan Group,” says the company headquarters.

Škoda Octavia RS is to be a plug-in-hybrid