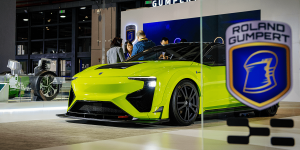 Gumpert Aiways Automobile presented the series version of their methanol fuel cell, which works without liquid hydrogen, at the central Chinese importer fair in Shanghai. The first cars are to be delivered in 2020.

After last year’s presentation of the RG Nathalie e-sports car concept with a methanol fuel cell, Roland Gumpert has now delivered the series version of the special fuel cell. The vehicle should be able to drive around 1,000 kilometres with this fuel cell before it has to be refuelled in a three-minute process.

According to the company, the fuel cell converts one litre of methanol into two kilowatt-hours (kWh) of electricity. The 70-litre tank thus potentially stores 140 kWh of traction current, another 70 kWh is stored in a battery – Gumpert Aiways calls this battery “buffer battery” despite its size. With a total of 210 kWh, the stated range of 1,000 kilometres should be possible – resulting in a total consumption of 21 kWh/100 kilometres.


“I wanted to build an electric car that wouldn’t stop and now it’s done”, said Roland Gumpert at the presentation at the Asian importer fair CIIE.

The methanol fuel cell comes from Blue World Technologies. “With a fast-moving approach and a strong focus on quality and driving experience, Aiways is without a doubt the right player to lead the way to commercial success for the methanol fuel cell vehicle,” says CEO Anders Korsgaard. The cooperation now announced with Blue World Technologies goes beyond the Gumpert project: At the end of 2021, the electric SUV U5 by Aiways will also be offered with a methanol fuel cell. In addition to the exclusive electric sports car, the technology would then also be used in a volume model in the near future.

However, Gumpert is ready to make the start. The first production vehicles of the limited Nathalie “First Edition” are to be delivered in summer 2020. Before that, the series model is to be presented at the Geneva car season in March.

At the presentation of the concept car last year, it was still stated that Gumpert wanted to offer a “simple solution for methanol supply” until the start of series production. This is no longer mentioned in the current press release. The price of around 420,000 euros per vehicle that was circulated at the time is also no longer mentioned. The premiere of the production car in Geneva will hopefully provide answers to these questions.