5,145 new zero-emission cars were registered in Norway in February just past. The market share of purely electric cars in new passenger car registrations was thus 49.7 per cent. In total, including HEV and PHEV, 79.2 per cent of all newly registered cars in Norway had either an electric or hybrid drive. The Audi e-tron was the most popular model across all drive types.

Compared to the same month last year, this marks an increase in all-electric registrations of 13.9 per cent. While Norway still recorded declines in the last three months of 2019, things have started looking up again in the new year. In January, 4,236 new all-electric cars were put on the road.

In addition to the 5,145 all-electric cars last month, a further 3,047 new hybrid passenger cars also hit the roads. The market share of hybrids was 29.5 per cent. Among the 3,047 hybrid passenger cars were 1,910 plug-in hybrids. Hybrids also saw a 34.7 per cent increase in registrations compared to the same month last year. If both all-electric and electric-hybrid cars are added together, 79.2 per cent of all newly registered passenger cars in Norway in February were thus equipped with an electric or hybrid drive. 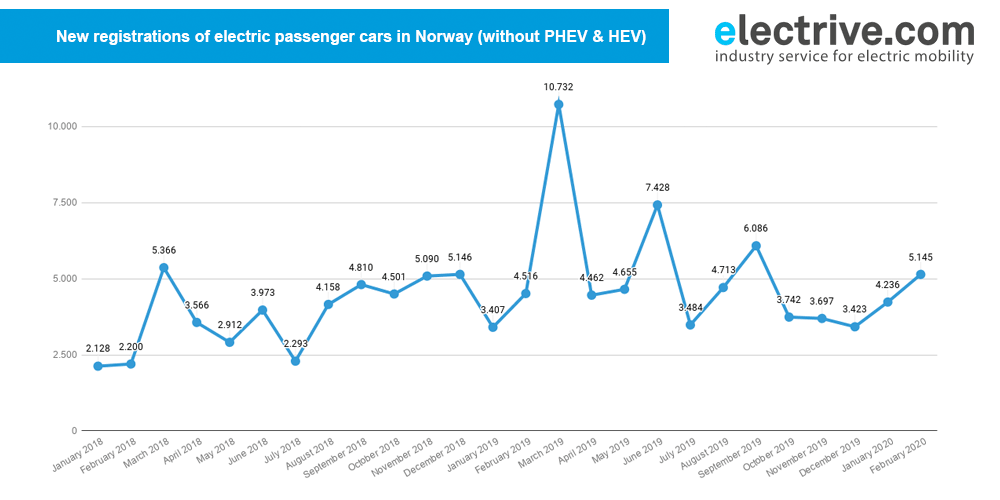 With regard to the individual models, the Audi e-tron quattro again recorded the highest number of new registrations across all drive types. A total of 1,171 of this model were registered for the road in February. The VW e-Golf (755 new registrations) only followed in second place by a clear margin. The Nissan Leaf made it to third place with 484 new registrations.

with reporting by Daniel Bönnighausen