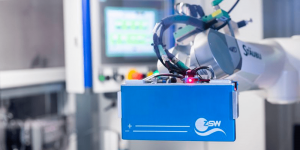 “Electromobility will change the supplier industry for the automotive industry very significantly,” says Dr Margret Wohlfahrt-Mehrens, head of battery research at the ZSW. “We must do everything in our power to rapidly advance the development and production of battery systems in order to ensure the future viability of Germany as an automotive country. With the ZellkoBatt project, we are expanding our existing technology infrastructure to accelerate the transfer of innovative battery cells to industrial mass production”.

ZellkoBatt has the task of furthering the “Development, construction and validation of advanced material, cell and production systems for a cost-efficient, sustainable and large-scale battery cell production.” ZSW researchers are striving for a significant improvement of lithium-ion cells compared to the current state of the art, says the research institute in a statement. “To this end, the long-standing process and production technology know-how is to be expanded to include large-format pouch and PHEV-2 cells up to 80-ampere hours as well as round cells of type 21700,” explains Dr Wolfgang Braunwarth, head of the production research department at ZSW.

In addition, the ZSW wants to expand the possibilities of digitising cell production: Via a cloud-based data interface, data could be used for further research purposes and transferred to external partners. Examples would be the modelling and simulation of production or intelligent process control through machine learning. In the future, it should be possible to react faster to the requirements of the industry or to new research findings.

The heart of electric vehicles is the battery. While competitors in Asia dominate the market because they have been investing massively in expanding their mass production of battery cells over the last few years, production in Germany has hardly been able to go beyond the status of pilot lines or small series production. It is only recently that the first European OEMs have been able to herald the establishment of significantly larger cell production facilities.

According to the ZSW, one problem here is the high level of investment required to set up mass production, especially if the suitability of the products for series production has not yet been proven. “ZellkoBatt will contribute to solving this problem so that there is a lot more movement in the establishment of production capacities in Germany in order to be able to meet the growing demand for batteries,” announced the Centre for Solar Energy and Hydrogen Research Baden-Württemberg.

ZellkoBatt is a building block in the “Battery Research Factory” umbrella concept of the German Federal Ministry of Education and Research (BMBF) and in the German government’s High-Tech Strategy 2025 for the establishment of competitive battery cell production in Germany.