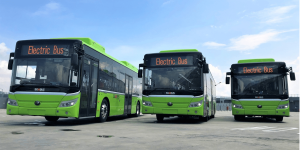 Starting immediately, the government of Singapore will only procure electric and hybrid buses from now on and aims is to completely electrify the bus fleet by 2040. Singapore’s bus fleets currently number around 5,400 vehicles.

According to media reports, Janil Puthucheary, Minister of State for Transport, is said to have formulated this goal before parliament. Since March 2019, the first 50 diesel-electric hybrid buses have been operating on the streets of Singapore, and 60 fully electric buses are to follow this year. The bus depots are to be adapted for this purpose.

The minister did not give further details on the government’s electrification plans for the bus fleet, such as the planned distribution of battery and hybrid buses, which has a major impact on the operation and maintenance of the fleet. However, he encouraged taxi drivers to switch to electric cars. According to the Straits Times, only 133 of 18,528 taxis in Singapore were electric at the end of January.

Janil apparently described the political goal of completely excluding fossil-fuelled buses from 2040 onwards as “ambitious”. “This means that we should not see any new purchases of vehicles with combustion engines after 2030,” he said.

The government had announced some measures for this goal in February. Among other things, 28,000 public charging points (instead of the current 1,600) are to be in operation by 2030, and further tax rebates and surcharges based on a vehicle’s emission values are also planned.

Update 06 April 2020: Singapore’s first ten all-electric buses have gone into operation. They will be used on lines 15, 66, 944, 983 and 990. Line 66 is to be the longest of the electric bus routes with five hours for a return trip, as the responsible operator Tower Transit writes on Facebook. Besides Tower Transit, SMRT and Go-Ahead Singapore also operate some of the new electric buses in Singapore.