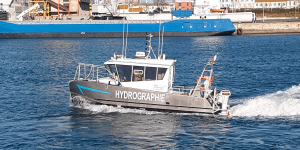 The eight-meter-long aluminium ship named Cassiopée will now cover the distance from the port to the area of operation using diesel propulsion, and switch to electric propulsion during the seabed scans.

According to Torqeedo, the company worked closely with the shipbuilding and shipyard company and developed, installed and integrated an electric drive package consisting of two Cruise 10.0 R electric outboards with four Power 48-5000 lithium batteries each. The package also includes an intelligent battery management system.

“The dual-mode propulsion system gives the best of both worlds – high-speed transits to maximize uptime on station and efficient, emission-free slow-speed operation for long periods when conducting an underwater survey”, says Franck Souchay, Captain of the Cassiopée, “The boat operates on electric power at a speed of 5 knots for 6 hours, which perfectly covers our needs in electric mode on a working day. Then the batteries are recharged at the pier during the night.”