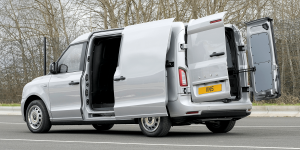 The Geely subsidiary LEVC has announced the name of its new e-transporter with range extender due for production this year. It’s called the VN5, where the number represents the five cubic meter load capacity. There are also further details about the van’s chassis.

The electric van thus follows the previous LECV naming system: the model is represented by the abbreviation TX on the familiar taxi, while the new van is to be called VN for Van. In both cases, the 5 indicates the five cubic metre load or interior space.

According to the manufacturer, the van’s payload is over 800 kilograms. The rear door opens at a ratio of 60:40. Besides, the size of the side sliding door has been chosen so that a pallet can be loaded from the side. Since the VN5 is based on the TX5, LEVC’s electric cab, it has the same small turning circle, which should help in the city. Battery-powered, the van has a claimed electric range fo 102 kilometres, and with the range extender, which LEVC calls “eCity”, the total range increases to 485 kilometres. On a 50 kW charger, the battery should be fully charged in 30 minutes.

In addition to the advantage that the VN5 can also enter areas with restricted access for combustion engines, the model should offer “competitive operating costs” according to LEVC. The maintenance intervals are 40,000 kilometres. The aluminium body is to be particularly corrosion-resistant. Body parts made of composite material are also to be less sensitive to small dents.

Pre-series production of the PHEV transporter has recently commenced, as reported, with mass production scheduled to start in Anstry near Coventry in the 4th quarter of 2020. LEVC expects the van to account for around 70 per cent of the plant’s annual production capacity of 20,000 vehicles.