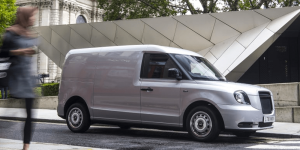 The Geely subsidiary LEVC (London Electric Vehicle Company) wants to create 100 new jobs during the production of the new delivery van in Anstry near Coventry. Pre-series production of the PHEV transporter recently started. But the company also has ambitious plans with the well-known taxi model.

LEVC plans to more than double its market presence this year and to be represented in 20 countries by the end of 2020. Building on their record year 2019 with more than 2,500 units of its taxi sold, the company forecasts a 50 per cent increase in demand for 2020.

The new van is scheduled for launch in the fourth quarter of 2020 and uses the same electric drive with range extender as the TX taxi model. The drive, which LEVC calls “eCity”, allows up to 130 purely electric kilometres and a total range of “over 600 kilometres”. The Range Extender is a three-cylinder petrol engine supplied by Volvo – like LEVC, the Swedish company is also a Geely subsidiary.

“We are at a pivotal time in LEVC’s history. Our strategic direction is on track as we deliver consistent, planned growth,” says CEO Jörg Hofmann. “I am pleased to be able to create new employment opportunities this year to support the continued success of our business.”

In addition to the TX and the planned Transporter Van, LEVC’s product range also includes the TX Shuttle, a version of the TX taxi model that has been further developed with a view to “Mobility as a Service”.

with reporting by Sebastian Schaal, Germany