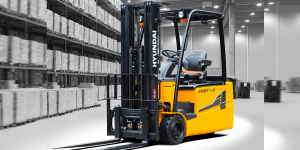 Hyundai Material Handling has re-engineered the U-series of its battery-electrically three- and four-wheel forklift trucks. The focus was on comfort, performance and power consumption. The Hyundai Group is also working on hydrogen-powered excavators.

Hwang Jong-hyun, Head of the R&D Division for Hyundai Material Handling at Hyundai Construction Equipment, said that the agreement between the three companies provides “a foundation upon which we can secure core technology in hydrogen-powered construction equipment ahead of our competitors.”

On the front of electric forklifts, Hyundai Material Handling has upgraded the electric three-wheel forklifts, which are available in three versions. The upgrade has seen the zero-emissions vehicles equipped with a control system by Zapi from the ACE series as well as new drive motors by Schabmüller and a driveline by ZF. According to the company’s press release, the new engines are to be more powerful (drive motors 2 x 5.4 kW, lift motor 14.9 kW), while the Zapi control system should allow them to be operated more gently and efficiently. Even with the increase in power, the overall energy consumption should be lower.

Also new are functions such as an automatic parking function that prevents the truck from rolling when idling. In addition, the 3-wheel models 15BT-9U, 18BT-9U and 20BT-9U (each designed for a load capacity of 1,500, 1,800 or 2,000 kilograms) are fitted with electric steering that should bring energy savings of up to 33 per cent. At the same time, the servomotor only draws power when the truck is actually being steered.

Hyundai’s upgraded electric forklifts have been given several battery options: Lead-acid batteries are fitted as standard in the 20BT-9U with up to 750 Ah capacity. But lithium-ion batteries are also becoming increasingly popular for forklift trucks. The new models are Li-ion compatible ex-works, but here the maximum capacity is 470 Ah.

The situation is similar for the larger four-wheeler models for a load range of 2,500 to 3,500 kilograms: For the 25B-9U, a maximum of 720 Ah is possible with lead-acid batteries, while the two larger variants 30B-9U and 35B-9U have a maximum of 900 Ah. All three variants can also be ordered with a 564 Ah Li-Ion battery. Unlike the three-wheel forklift trucks, the four-wheel models also have electro-hydraulic power steering.

Very practical for high energy use, all models feature removable batteries so that charging the batteries simply requires a swap with fully charged batteries. This has the obvious advantage that the machines do not have to be taken out of operation for recharging. Hyundai has allowed drivers the additional possibility of charging the batteries in the vehicle. All forklift trucks can be supplied with heated cabins, including single and/or double doors. The maximum lifting height is seven metres for the 9U series.

Like other commercial vehicle manufacturers, Hyundai expects the demand for environmentally friendly and quiet electric construction machines to see a strong increase.