In Sweden, electric cars and plug-in hybrids achieved a market share of 27.2 per cent in March. The winner among the plug-in cars was the Tesla Model 3 with a total of 1,084 new registrations.

The new listing boom in electrified vehicles corresponds to a change in the Swedish bonus-malus system that came into force at the turn of the year. According to Statistics Sweden, this system will affect new registrations throughout the year. 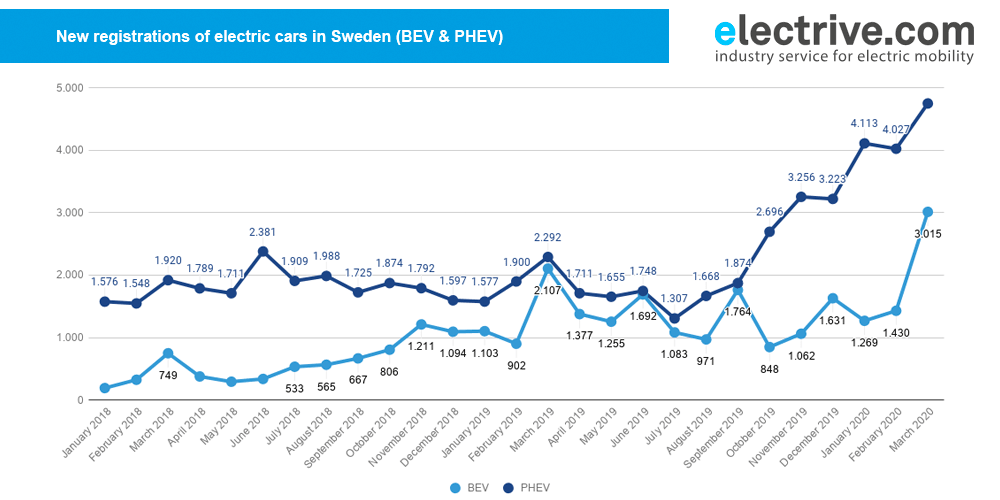 Looking at the first quarter in 2020, all-electric passenger cars increased by 39 per cent compared to the same period last year. In the case of plug-in hybrids, the increase was even 123.5 per cent compared with the first three months of the previous year.

Overall, however, the Swedish car market declined by 8.2 per cent year-on-year in March with 28,535 new registrations, according to a report by the state agency Statistics Sweden. Both diesel and petrol engines lost significant market share.

The electric car boom (especially for PHEVs) is due to the bonus-malus system. Although this system has been in force since 2018, an amendment effective from 1 January 2020 stipulates that CO2 emissions are to be measured according to the WLTP cycle, and here, consumption and CO2 values are on average 20 per cent higher than in the NEDC previously used. In concrete terms, new cars with CO2 emissions of less than 70 g/km will receive a bonus of up to €5,700 (graduated in various stages between 0 and 70 grams), while vehicles with CO2 emissions of more than 95 g/km will be subject to higher taxes as a malus.

Renault Group to focus on electric cars in China