In Norway, 3,671 new electric cars were registered in April. Electric vehicles accounted for 49.4 per cent of new passenger car registrations. Once again, the Audi e-tron was the most popular model across all drive types.

Compared with the same month last year, this was a drop of 17.7 per cent (791 fewer). In any case, April was not one of the strongest months in the last three years. The corona pandemic now seems to be contributing its share. This is because, across all drive systems, new passenger car registrations fell by 34 per cent compared with April 2019.

In addition to the 3,671 electric cars – 6,966 new registrations in March 2020 – 2,084 new passenger cars with hybrid drive were added to the 3,671 electric vehicles in Europe’s showpiece country for electric mobility. The market share was 28.1 per cent. Compared with the same month last year, this segment had to record a minus of 14.2 per cent. The 2,084 hybrid passenger cars included 1,497 plug-in hybrids. The PHEV listings increased by 31.2 per cent compared to the same month last year. 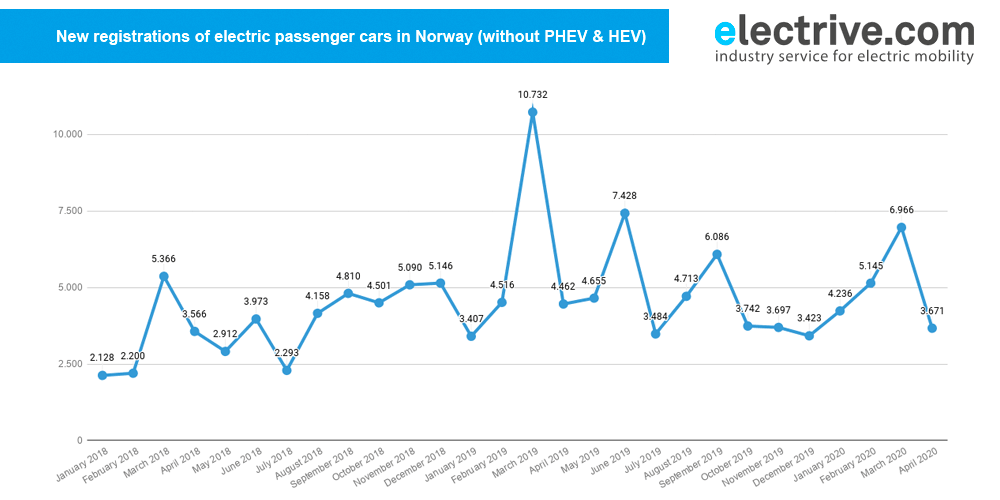 In terms of individual models, the Audi e-tron Quattro again recorded the highest number of new registrations after the first three months of this year. A total of 832 new units of this model (4,586 e-tron so far in 2020) were put on the road in April 2020. The VW e-Golf followed at a considerable distance with 498 new registrations (2,400 units so far in 2020). The Nissan Leaf made it to third place with 349 new listings. A total of 1,717 Leaf were newly registered between January and April.