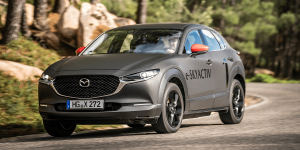 Mazda has started production of the all-electric MX-30 at its plant in Ujina, Japan. In the second half of 2020 the electric car will roll into the showrooms of European Mazda dealers. While prices have not been released for most individual markets, in Germany, it will start at 33,490 euros.

In March, Mazda announced the pre-sale in Germany for its first production vehicle with battery-electric drive. In addition to the standard model, the Japanese company is launching a limited First Edition at the start of German sales – starting at 33,990 euros excluding the environmental bonus or 299 euros per month (48 months running time, 10,000 kilometres driven per year). According to Mazda, this offers a customer advantage of 2,600 euros with its “extensive equipment” and can only be ordered in advance.

The MX-30 is a compact, 107 kW electric crossover that is based on the same platform as the CX-30 internal combustion model. Nevertheless, Mazda has changed a few things on its first electric vehicle model, such as the emphatically simple design and the access concept with doors opening in opposite directions. Other features and design highlights include a floating centre console and a seven-inch touch screen, as well as the use of environmentally friendly materials such as cork and fibres from recycled plastic bottles.

Remarkably, the Japanese company is taking a different approach to the battery than most of its competitors. With an energy content of 35.5 kWh, the power storage is relatively small in comparison; the range will be 200 km (combined) or 262 (urban) in the WLTP. Mazda talks about ‘rightsizing’ and claims to have chosen the battery size in such a way that it is sufficient for most journeys, but does not increase the CO2 load from production. Using DC quick charging, the battery of the MX-30 can be charged to 80 per cent within about 40 minutes.

In 2021 Mazda wants to follow up with a version with range extender, the small Wankel engine should noticeably increase the range. Mazda has not yet provided technical data or prices for this version.

Jaguar to cancel I-Pace eTrophy after this season