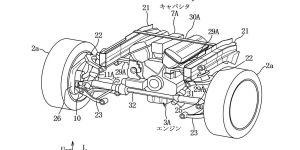 Mazda has patented an extraordinary hybrid drive with a Wankel engine in Japan. The system works with a total of three electric motors and, according to Mazda, is primarily intended to be lighter than current electric four-wheel-drive systems.

It was already clear that Mazda is working on a comeback of the Wankel engine: The rotary piston engine is soon to be offered as a range extender in the electric SUV MX-30, but in a rather conventional arrangement: Both the electric motor (on the driver’s side) and the small Wankel (on the passenger side) sit in the front in the classic engine compartment, the electric motor drives only the front wheels.

The patent application for the novel hybrid system is much more unconventional: The combustion engine located in the front can act as a range extender to supply electricity for a 25 kW electric motor that drives the rear wheels. In addition, however, it can also drive the rear wheels directly – via an unspecified transmission. There are also two electric wheel hub motors at the front, which are supplied with power by a supercapacitor. The lithium-ion battery integrated into the hybrid system has a voltage of 48 volts and only 3.5 kWh storage capacity. An external charging option is not shown in the patent drawings. 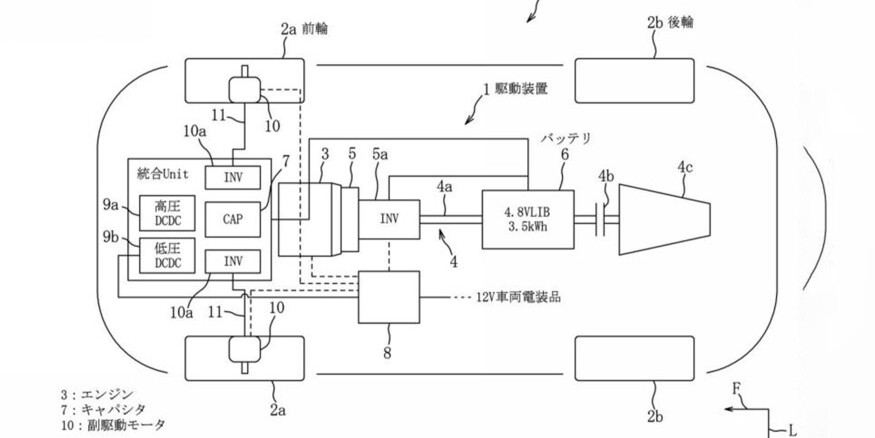 Theoretically, an in-line or V-engine could also be installed in the complex drive, as in the MX-30, Mazda emphasizes the compact design of the Wankel engine as a decisive advantage. However, the propulsion is to be handled primarily by the three electric motors.

The rear engine, fed from the 3.5 kWh battery, with its 25 kW should be sufficient for most smooth acceleration processes in the city; in the case of higher power requirements, the two-wheel hub motors on the front axle come into motion. As a last resort, the combustion engine is to drive the wheels directly. Mazda has not revealed more information about the performance of the wheel hub motors and the Wankel, and the storage capacity of the supercaps is also unknown.


These capacitors can absorb and release electrical energy much faster than a lithium-ion battery. At the front axle, where higher recuperation rates are possible due to load changes, the energy is to be buffered in the supercaps so that it can be used again during the next acceleration. According to the schematic drawing from the patent application, the two energy storage units are connected to each other. Thus, when the capacitors are fully charged, further current from the braking energy recovery system can be transferred to the battery. If the capacitors are empty, the battery can also charge the capacitors inversely and thus indirectly transfer energy to the wheel hub motors.

Supercaps are lighter than lithium-ion batteries, but cannot store the energy for as long. Nevertheless, Mazda hopes that the unusual drive layout will result in an overall weight saving compared to electric four-wheel-drive systems based on several electric motors and one large battery. In the past, Mazda has emphasised several times that large battery capacities were considered a mistake and spoke of “rightsizing” when it came to the MX-30 (with 35.5 kWh capacity).

What remains to be seen, is how high the electric driving components really are in practice – or the driving components with recuperation energy and not with electricity generated by the combustion engine. The Japanese company also did not provide any information about the efficiency and performance of the overall system.

According to another media report, however, the drive may be more than the engineers’ pipe dreams and could be built in series production as a lighthouse project in a sports car called RX-9 (based on the previous Wankel models of the RX series). What seems less likely though, is the use of the complex drive system in a volume model.

Maple 30x is a new low-cost EV from China