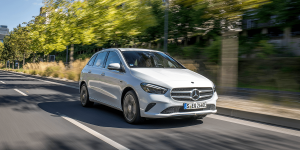 eAfter Mercedes-Benz started selling the model upgrades for the E-Class, including the plug-in hybrid versions, sales of three more PHEVs are now starting: the CLA 250 e Coupé, the CLA 250 e Shooting Brake and the B 250 e.

The market launch will start in summer. The GLA with plug-in hybrid drive will follow a few weeks later. At least with the B 250 e, which should not be confused with the electric version of the previous generation (2014-2017), which is also called the B 250 e, there was probably a delay. When Mercedes announced the plug-in hybrid in August 2019 in the A and B class, they said sales of the B 250 e would start “in a few weeks” – while the A-class versions (compact car and saloon) could be ordered immediately. Those weeks have now turned into months.

But the drive system is the same for all compact PHEVs: the internal combustion engine is a 1.33-litre four-cylinder petrol engine which produces 118 kW. The system output with the 75 kW electric motor adds up to 160 kW. The maximum system torque is 450 Newton metres. The permanently excited synchronous motor is located in a specially developed hybrid powerhead for the eight-speed dual-clutch transmission. Although the three models are cars with transversely mounted engines, the hybrid drive follows the same technical principles as the corresponding component of the vehicles with longitudinal engines. By the way, the electric motor also replaces the classic starter. The top speed for all models is between 235 and 240 km/h, in electric mode up to 140 kph is possible.

The vehicles are equipped with a 15.6 kWh high-voltage storage unit, which is slightly larger than in most comparable cars. The electric range is to be up to 69 kilometres according to the WLTP, and in the NEDC Daimler still claims in some cases up to 79 kilometres. However, a different feature is likely to have a more significant impact in everyday use: Mercedes also offers direct current charging for its compact PHEV models. The AC onboard charger achieves 7.4 kW, which means that the charging time from 10 to 100 per cent should be 1:45 hours. DC direct current charging reduces the charging time from 10 to 80 per cent to 25 minutes. Assuming a net capacity of 14 kWh, this results in charging capacity of around 24 kW. However, the 7.4 kW onboard charger and the DC charging function are only available as options. Both features can also be retrofitted.

Daimler has probably also taken the delay in the B-Class as an opportunity to revise its price calculation: In the announcement in August 2019, an entry-level price of 37,663 Euros was still quoted for the B 250 e – now it is at least 39,347 Euros. The costs for the A-Class remain unchanged at 36,943 Euro (compact car) and 37,300 Euro (saloon), while the CLA Coupé is priced in at 42,453 Euro and the Shooting Brake at 43,191 Euro. Daimler does not yet mention the prices for the outstanding GLA 250 e in the announcement.

It is noticeable that the price difference for the PHEV versions now on sale is more significant than for the other engine versions of the compact models. Across different gasoline and diesel engines, the B-Class is about 1,700 Euros more expensive than an A-Class, while the difference increases to about 2,400 Euros for the PHEV versions. Depending on the engine, the CLA Coupé is between 3,500 and 4,200 Euro more expensive than the compact version of the A-Class. With the PHEV, however, it is 5,510 euros more.