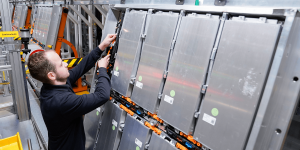 Volkswagen had already invested 100 million dollars in QuantumScape back in 2018 and has since become the largest automotive shareholder of the battery specialist, which is a spin-off that began at Stanford University. The total investment of 300 million dollars corresponds to a value of 265 million euros at current exchange rates. However, the announced investment has not yet been completed. “Closing of the new additional investment of up to US$200 million and the associated increase of Volkswagen’s stake in QuantumScape is still subject to various conditions,” the Group’s announcement states.

The two companies have been working together since 2012; prior to the investment in 2018, VW already held five per cent of QuantumScape. Since then, there has been no precise information on how many shares the German carmaker holds – only the now repeated formulation of being the largest automobile shareholder.


But it is clear what VW expects from the investment: Higher ranges and shorter charging times for the coming electric cars. “We are making technological progress with our partner QuantumScape,” says Thomas Schmall, CEO of Volkswagen Group Components. “The additional investment will sustainably strengthen and accelerate our joint development work.”

On the way to mass production, plans for a pilot production are to be made concrete before the end of this year, according to VW. “Volkswagen is taking e-mobility to the mainstream. A strong position in the field of batteries is a decisive factor in this regard,” says Frank Blome, head of the Battery Cell business unit at Volkswagen Group Components. “We are securing our global supply base with efficient producers, gradually building up manufacturing capacities and driving the development of cutting-edge solid-state battery technology. Our focus in this context is on long-term strategic partnerships.”

In the press release, VW describes solid-state battery technology as being “the most promising technology for the next-but-one generation of e-mobility”. With the same size of battery, electric cars with such cells should achieve ranges comparable to those of a combustion engine.