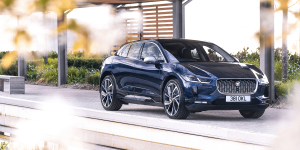 The new model year of Jaguar’s only all-electric car I-Pace now includes a three-phase AC charger for faster charging and a new infotainment system. The latter has extended functionalities for planning a route including charge stops. The company has also adjusted its pricing.

With the 11-kW AC onboard charger, the duration of a complete charging process is to be reduced to 8.6 hours where the previous 7-kW onboard AC charger took around 13 hours. Jaguar says the 11-kW charger can recharge at a rate of 53 kilometres (33 miles) per hour, provided the charging station or wall box delivers this power. With the previous charger, drivers could only recharge with 35 kilometres worth of energy in an hour. The DC charging capacity will not change with the model update, so the new charger will only affect those customers who regularly charge at public AC pillars or have a wall box with more than 11 kW.

Generally, all customers should benefit from the new navigation system. The improved integration of charging points should optimise navigation over longer distances. An e-Sim card is now integrated into I-Pace, which has a data volume of 20 GB per month and is free of charge for the first year.

In addition, the familiar pre-air conditioning of the interior has been extended with a pre-cleaning system. A PM2.5 filter is designed to filter fine particles and allergens such as pollen from the air inside the vehicle before the journey. Further updates relate to the 360-degree camera, the interior mirror is now frameless and contains the HD display familiar from the Land Rover Evoque, to display the image of the wide-angle rearview camera integrated into the roof fin if desired – for example, if cargo or large passengers make it difficult to see through the classic interior mirror.

From the outside, the model upgrade is hardly visible. The use of the radiator grille is new, for example, and the paint colours have also been adapted. In the optional ‘Exterior Bright Pack’, chrome accents and in grey (exterior mirrors, diffuser) complete the appearance.


Nothing has changed in the drive system itself: the two electric motors have a combined output of 294 kW, the range in the WLTP test is 470 kilometres. Jaguar states the consumption as 24.8 kWh/100km.

The basic list price in Germany is 77,300 euros, and for the duration of the period that VAT for electric cars in Germany is reduced to 16 per cent, the I-Pace is available from 75,352 euros. According to Jaguar, this price includes the service costs for the first three years or 100,000 kilometres.

In Germany, Jaguar had only just reduced the price of the I-Pace in May down to 77,300 euros gross. With a netlist price of 64,957.99 euros, the I-Pace EV400 S model is just below the price ceiling for the recently revised environmental bonus and is therefore eligible for government subsidy. The SE and HSE versions cost considerably more and even with the temporary reduction in VAT in Germany, they will not fall below the price limit of  65,000 euros net.