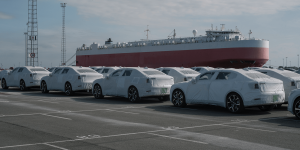 The first delivery of purely electric Polestar 2 has arrived for customers in Europe. The vehicles are now being prepared in Belgium for further transport – but not to the UK, Germany and the Netherlands quite yet.

Polestar has announced that the first batch is intended for customers in Norway and Sweden who can expect delivery in August. The shipload that has now arrived in Zeebrugge will be transported overland to a central hub in Belgium, checked again and distributed.

According to the manufacturer, the vehicles for customers in Germany, Belgium, the Netherlands and the United Kingdom are “following closely behind”, while deliveries to customers in Switzerland are to follow later this year as reported. According to its statements, the Volvo subsidiary is sticking to its planned delivery “in summer 2020”.

The company is even going one step further: In Germany, those who order today are guaranteed delivery in 2020, so that consumers can benefit from the announced government subsidies. Polestar says that the state subsidies mean that there is currently an increased demand but do not mention numbers.
“This is a big moment,” comments Thomas Ingenlath, Polestar CEO. “We are one step closer to getting Polestar 2 to our first customers in Europe. The arrival of this first shipment is proof of just how committed we are to our customers and how our operations are working at high efficiency around the world.”

Series production of the Polestar 2 started at the end of March in Luqiao, China. Polestar, like Volvo, is owned by Geely.

In Germany, customers have been able to convert the refundable down payment into a binding order since April. Before deduction of the environmental bonus, the gross purchase price is 57,900 euros. In the configurator, however, the starting price is 54,925 euros; here, Polestar has already deducted the manufacturer’s share of the environmental bonus. The state subsidy is also included – with the new bonus this would be 5,000 euros, plus VAT is down to 16% from 19% in Germany this year.

Polestar is also planning launches outside Europe, i.e. in North America, where Volvo and its subsidiary Polestar get separate tax credits. The list prices of the Polestar 2 start at 59,900 US dollars excl. the federal tax credit of 7,500 dollars. In China, where Polestar just opened a new factory, the guide price of 460,000 yuan (around 57,300 and 58,600 euros, respectively) will continue to apply. The all-electric car by the Swedish-Chinese brand is largely seen as an alternative to the Tesla Model 3.

VW to make only electric cars in Zwickau from now on