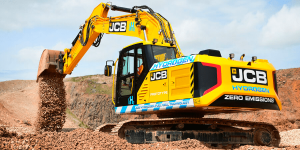 JCB has just presented its prototype of a hydrogen-powered excavator. According to the manufacturer, the 20-tonne 220X excavator equipped with a fuel cell system is the first of its kind in the industry. The excavator has been tested on JCB’s test site for more than a year.

The British company has published a short video of the H2-excavator, but technical details and plans for commercialisation have not yet been revealed. Company boss Lord Bamford only says that the technology will be refined in the coming months.

The development of an H2 prototype is apparently due to the entrepreneur’s son Jo Bamford’s commitment to the H2 industry. After working for JCB for 14 years, he founded Ryse Hydrogen and later bought the Northern Irish bus company Wrightbus, among others. He has received orders to supply the world’s first hydrogen biplane to cities such as London and Aberdeen.

Meanwhile, the manufacturer has been working with alternative drive systems for some time: In 2018, for example, JCB presented a battery-powered mini excavator called 19C-1E in 2018, which, according to current information from the company, has been in production since last year. The British company also announced that they had extended the battery technology to the 30-19E series of telescopic forklifts.With reporting by Cora Werwitzke