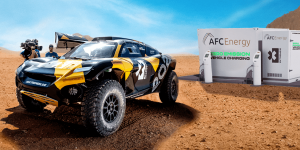 Agag is no stranger to electric racing, only this time, the Extreme E series 1 is anything but urban. When it takes off next January, bespoke electric SUVs (of the real off-road kind) will race in five events covering the planet’s most extreme zones: the Arctic, the Himalayas, the Sahara desert, the Amazon and an island in the Indian Ocean.

According to Extreme E’s website, the series will “highlight climate change challenges faced by different ecosystems, whilst showcasing the performance of bespoke all-electric SUVs in extreme conditions”. This is where the H-Power Charger by AFC Energy comes in, to “simply” bring charging to these remote locations.

According to AFC, their mobile hydrogen power solution utilises micro-alkaline water electrolysis, which removes the need to store and transport hydrogen to different race meetings. In other words, they use electrolysis to generate energy from hydrogen which is then used to charge the electric cars. The process becomes green as AFC uses solar power for the electrolysis.

When the company first introduced its solution last December, their pitch was to supply remote locations with high power charging. While the first trial is happening in Britain, already CEO Adam Bond said the system could deliver EV charging “in the most remote off-grid locations”.

The Extreme E series will surely be that. Agag in a statement considered the collaboration with AFC Energy “a game changer not just for Extreme E, but also to the wider sports and events industry which could also benefit greatly from using this innovative, zero emission charging technology,” Agag said in a statement.