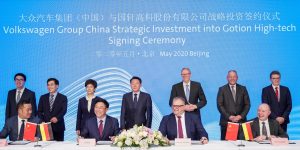 According to the Chinese portal Autonews Gasgoo, the plant will have an annual capacity of 30,000 tonnes and will start test operations in 2023. Gotion High-Tech (also referred to as Guoxuan in other reports) already has the contract for the 23-hectare site in its pocket. Preceding the signing was an agreement with Volkswagen China this May, in the course of which the German automaker is investing around one billion euros. In return, Volkswagen will in future hold 26 per cent of Gotion High-Tech. The partners expect to complete the transaction by the end of this year.

With this investment, Volkswagen China intends to secure the future demand for battery capacity for the Chinese e-models. Remarkably, VW is the first international OEM to invest directly in a Chinese battery supplier. At the same time as the investment, the Wolfsburg-based company confirmed in May that it intends to increase its share in JAC Volkswagen, its China joint venture for electric mobility, from 50 to 75 per cent and also invest around one billion euros in this.

“With the capital increase, Volkswagen is paving the way for the expansion of its electric model range and infrastructure,” Volkswagen stated in a press release in May. With the expansion of its position, the company could “take the next step in its electrification strategy in China”. Five more models are planned by 2025, and a factory for electric cars and a research and development centre are also to be built.

Meanwhile, Gotion High-Tech plans to build a battery factory with a capacity of 16 GWh besides the factory for cathode materials announced above. Whereas the Group has so far relied primarily on lithium iron phosphate technology for its batteries, it now intends to “take active steps to build up capacities in the field of lithium-ion batteries”. The cathode material project based in Hefei plays a crucial role in this process.