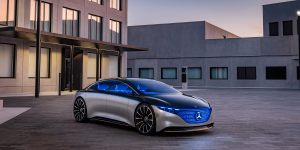 Daimler CEO Ola Källenius recently revealed some more details about EQS in his speech at the Annual Meeting. The purely electric luxury sedan, based on a fully electric architecture, is to herald “a new era at Mercedes”.

In addition, the chairman of Daimler’s board of directors stated that the electric S-class counterpart is supposed to offer “more than 700 kilometers of range according to WLTP”. When the concept car Vision EQS was presented last year, a WLTP range of “up to 700 kilometres” had been mentioned.

It remains open what exactly Källenius means by “next year” – the actual market launch or just the presentation of the actual production model. The production version will roll off the production line at Factory 56 in Sindelfingen, as Källenius now explained. The battery packs will come from the Untertürkheim factory. He sees this as a “symbol for the future viability of Germany as a business location”.

While premium competitor BMW, as is well known, is building on the multi-energy approach and wants to build battery electric models on the same basis as the combustion engines (including the 7 Series as a potential EQS competitor), Stuttgart is relying on a purely electric platform. “This opens up entirely new possibilities–from the position of the batteries to the car’s design,” Källenius says.

So while BMW is tied to the large engine compartment for the V8 gasoline engines and the bulky front design in the electric 7 Series, Daimler has gone its own way in the creation of the Vision EQS, such as the elongated “one-bow” design and the short overhang at the front. It is not yet known whether the EQS production model will also adopt design elements such as the combination rear lamps consisting of 229 individual LED stars from the study – or whether it will become more conventional again at this point.

Many technical data are not known about the EQS. The EQS will be the first model based on Daimler’s scalable electric vehicle architecture (EVA). The skateboard design should not only allow flexible production of different models, but also different variants of a model. In the study, Daimler spoke of two electric motors that are to have a combined output of 350 kW. The charging power should also be 350 kW. There have already been reports about possible AMG versions of the EQS.