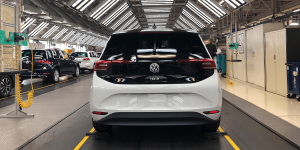 VW’s planned small electric car for under 20,000 euros will be launched two years later than previously thought, according to a new report. The presumed designation for the car is the ID.1 and is set to replace the VW e-Up.

As industry insider Georg Kacher writes in an article for Car Magazine, the ID.1 is not to go into production until 2025. Kacher did not extrapolate on the sources for his information. Until now it has been generally assumed that the ID.1 would be launched in 2023. Now, apparently, 2023 will see the presentation of the concept of the mini-starter, which is being developed under the internal code name e-Zzity.

The downsized MEB base is supposed to allow two battery sizes – “most likely 24 kWh and 36 kWh” though it is unclear whether these values represent a gross or net capacity. With the ID.3, VW specifies the usable net capacity. The version with a larger battery should have a range of 298 kilometres (185 miles), and there was no mention made of the range enabled by the smaller battery.

In the current version, the e-Up at 36 kWh gross comes to a standard range of 260 kilometres. The assumption is that the ID.1 would be a bit more efficient with a similar battery capacity. With a gross list price of just over 21,000 euros, the e-Up is already at the level that VW is aiming for with the ID.1. With one difference: With the ID.1, VW is likely to make a profit with this sales price, while the company is currently paying up to 5,000 euros for each e-Up sold, according to CEO Herbert Diess.

The visual appearance of the ID.1 or e-Zzity is supposed to be based on the ID.3, for example in the design of the front or the visually contrasting roof. The ID.1 should be similar to the e-Up in terms of floor space. According to Car Magazine, VW should also consider a more robust ID.1 Crozz version and a van derivative. Apparently an ID.2 is also being planned, which will be placed as a competitor to the Renault Zoe and Peugeot e-208. Kacher also hints at an R version of the ID.3.

VW, however, officially confirms that the engines for the ‘MEB Performance’ will be built in Kassel from 2023. The Volkswagen Group Components plant has prevailed economically over its global competitors, according to a statement by the Group. “In addition to the extensive product and process expertise of the components team, the reduced investment costs were the reason for the award of the contract,” VW writes. The costs are probably manageable because the standard engines for the ID.3 are already being produced in Kassel.