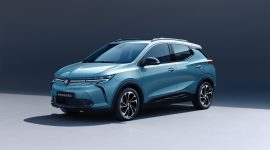 The Velite 7 is a full-size fully-electric SUV, while the Velite 6 and its sister model Chevrolet Menlo EV are more of a crossover of a station wagon, SUV and van. The 130 kW vehicle is said to have a range of 500 kilometres but is still specified in the NEDC most common in China. Two configurations are offered, costing 179,800 yuan (21,950 euros) and 199,800 yuan (24,400 euros) respectively.

The cells of the 55.6 kWh battery are from LG Chem, and GM says that improved cell chemistry and optimised lightweight design will give the battery “industry-leading energy density and performance”. The battery has liquid cooling, which should also enable rapid charging. GM does not mention a charging capacity, stating only that the battery should be charged in 30 minutes for 210 kilometres. Considering the size of the battery and the standard range, the charging capacity should be in the region of about 50 kW.

At the same time, General Motors has also announced the market launch of the Velite 6 PHEV. GM gives the system power as 135 kW and the 1.5-litre combustion engine with a power output of 72 kW. The battery (the cells are also from LG Chem) holds 9.5 kWh. GM says that the electric-only range is 60 kilometres, the overall range 780 kilometres and the NEDC consumption is said to be 1.4 litres per 100 kilometres. The Velite 6 PHEV offered in three versions costs between 159,800 and 179,800 Yuan (19,515 euros to 21,950 euros).

As part of General Motors’ Chinese joint venture with SAIC and Wuling called Baojun, a purely electric miniature car called the Hong Guang Mini EV is now also being offered in three versions. The mini electric car is to be sold at prices starting at 28,800 Yuan (3,515 euros). In the version with a 9.2 kWh battery, the small car has a range of 120 NEDC kilometres. The top model of this small electric car is going for the price of an expensive electric bike at 38,800 Yuan, the equivalent of 4,740 euros and can travel 170 kilometres with a 13.8 kWh battery.

The small electric car is just 2.92 metres long and not even 1.50 metres wide. Nevertheless, the Hong Guang Mini EV has rear seats, ABS with brake-force distribution (EBD), a tire pressure monitoring system and reversing radar. The company suggests the small car is also good for families with ISOFIX child safety seat restraint interfaces. If their backs are folded down, the loading volume should be 741 litres, according to GM. In view of the lack of crumple zones, the US company states that the car has passed 16 strict safety tests and bears a body made of high-strength steel.

Baojun only recently announced the fully electric city cars E300 and E300 Plus earlier this month. Six variants are priced between RMB 64,800 ($9,154) and RMB 84,800 ($11,980), which shows considerable confidence in the small electric car segment. The latest offer with the Hong Guang Mini EV now tops this off with an even cheaper model although a lower range.