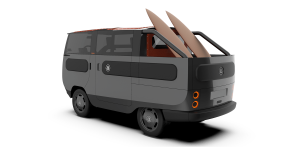 The German startup Electric Brands has announced the eBussy – an electric modular light vehicle (class L7e) designed with two variable chassis and 10 different body options. Series production is scheduled to begin in the second half of 2021 with a contract manufacturer in Heinsberg.

The most striking of the variants shown is probably the small campervan, which is visually reminiscent of a VW Bulli, but the eBussy is also offered as a panel van, a van with box body, flatbed van or even as a small bus. Two chassis – offroad and city – have ten different possible bodies. Modular battery options give the eBussy different ranges from 200 – 800 km. The light vehicle also has an extraordinary price starting at 15,800 euros, though almost doubling for some versions.

The drive technology is located in the 3.65-metre long platform, and the bodies should be relatively easy to exchange – just like Lego. For example, the vehicle should be able to be interchangeably used as a van, as a bus for the family and as a campervan on vacation with only one basic vehicle. It will be interesting to find out how much effort (and cost) is involved in changing the body.

With regards to its functionality as a transporting vehicle, the Electric Brands says that it has an empty weight without batteries, load and superstructure of only 450 – 600kg, but can still carry a load of up to 1000kg. As a people-mover, the vehicle can transport up to four people.

The electric vehicle startup Electric Brands is driving ahead with ambitious plans: In the first five years of production, 150,000 eBussy are to be built. In order to accelerate the market launch, the company is not planning its own plant, as mentioned above, but is using a contract manufacturer.

Such mobile platforms with exchangeable bodies have been presented by a number of companies over the last couple of years such as Schaeffler, Rinspeed together with ZF or Mercedes with the Vision Urbanetic. Despite the financially strong companies in the background, none of these concepts has yet made it into series production.

While other companies have toyed with the idea of exchangeable bodies on uniform electric skateboard systems Electric Brands have a decisive difference: Until now, all of the concepts with this kind of concept were based on autonomous driving platforms – eBussy still requires a human driver. At least this is how the makers avoid the hurdle of autonomous driving technology.

There are a few interesting solutions in the vehicle such as the steering mechanisms: In a video on the website, you can see that the steering should be done by Drive by Wire. The steering wheel unit in the cockpit is thus not connected to a mechanical steering column, but only to the wheels via electronics. It should also be possible to move the steering wheel unit easily – for example to the centre seat or to the passenger side. An innovative feature, but perhaps also a potential source of error in the tight schedule.


The platform itself integrates the technology that is important for driving and as a light vehicle, the technical data are hardly comparable with those of the larger concept studies. The two possible eBussy electric chassis types –off-road and city-driving– each come with an electric drive with 15 kW giving the eBussy a top speed of 90 km/h. The battery has a modular design in packages of 1.25 kWh each, so it should be possible to install between 10 and 30 kWh in the chassis depending on the application. The cells in the maximum of 24 battery packs come from Samsung SDI and Sanyo. The range is to be between 200 and 800 kilometres, depending on weight and construction. Solar cells on the vehicle will also help here, which according to the company will generate up to 13 kWh of electricity per day in sunny weather.

The basic vehicle, i.e. a cabin with chassis, is to be available from 15,800 euros. The future campervan is to start at 28,800 euros. At least for the basic vehicle, the eBussy would thus be somewhat cheaper than the Tropos Able XR, for example, the L7e transporter is available from around 18,000 euros net. The difference: the Able is already being built (in Herne, Germany.) Getting to production and the financing of electric vehicle startups is famously difficult and awkward in Germany, as StreetScooter, e.GO Mobile and Sono Motors have found out, the latter of which successfully turned to crowdfunding to finance the production of its solar car, the Sion.

So far the new company has two electric scooters as existing offerings, so it remains to be seen how they fare with this extraordinary and innovative product that has already attracted some international attention. New Atlas magazine wrote: “when we close our eyes and imagine an all-electric Volkswagen Type 2 for the 21st century, it’s the new eBussy that we see. That was true before we knew it existed, and it’s definitely true now that we’ve seen the actual design.” The magazine goes on to describe  “timelessly simple styling, the new German-designed electric mini-bus also promises some of the most impressive modularity out there… And so far, it looks to be surprisingly affordable.”

In terms of sales, Electric Brands wants to work with established dealers. The company has said that a number of dealers who currently sell cars from Hyundai and Opel want to include the eBussy in their showrooms. The company is targeting around 80 dealers in Germany – a network that would be the envy of many an established import brand.