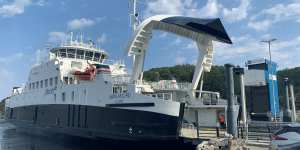 These electric ferries each have a capacity for 50 cars and will be used at four different ferry crossings along the west coast of Norway. NES has now equipped 19 electric and hybrid ferries in Norway with its drive systems.

It took a total of 2.5 years from signing the contract to handing over all five ferries. NES’ delivery included a complete propulsion package with, among other things, batteries, charging systems or even the specially developed DC switchboard called Quadro Master. NES informs that this modular DC system can also be used on other ships where DC voltage would be applied.