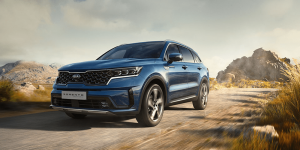 Kia presents the Sorento plug-in hybrid set for launch in select European markets in early 2021. The Sorento is the brand’s first SUV riding on the platform, that forms the new technical basis for the firm’s electrification strategy.

With its total output of 195 kW and 350 Nm of torque, the Sorento will be the most powerful PHEV in the Kia portfolio in future. While the electric range for Niro and Ceed is 49 kilometres after WLTP, Kia does not yet make any predictions for the Sorento electrified vehicle. “The full electric range of the Sorento plug-in hybrid will be sufficient to enable drivers to complete most short trips on electric power alone,” is all the Korean company states for now. As the data is pending homologation, Kia says they will confirm closer to the on-sale of the car.

There are internal details available on the design. For example, the power from the electric drive is transmitted to all four wheels via an automatic six-speed transmission. The South Koreans also announce that the Sorento PHEV will feature a new water cooling system for the battery and unique drive components to reduce noise and vibration levels. Visually, the plug-in hybrid version does not differ from the other Sorento versions.

This also applies to the degree of connectivity. Kia’s new Uvo Connect telematics system will be installed in the SUV, known in Europe from the new Kia e-Soul or e-Niro. The focus here is on the touchscreen in the car and its connection to the Uvo smartphone app.

As usual, Kia also offers a seven-year or 150,000-kilometre warranty on the new PHEV model, which also covers the battery.

Coming back to the aforementioned new platform, Kia has designed the architecture to accommodate various electric drive trains. Utilising the base, the Sorento grows by around ten millimetres to 4.81 meters, while the wheelbase is simultaneously increased by 35 millimetres. Kia says the drive compartment and battery beneath the cabin floor should not only provide space for the hybrid technology but also allow for shorter overhangs. The Sorento will continue the same five- and seven-seater layout that distinguishes the other models in the series.

The PHEV model is built at Kia’s Hwasung plant in Korea. From there, the manufacturer ships the vehicles to Europe and potentially other markets. The Korean company has yet to designate which markets to serve first at on-sale at the beginning of next year.

The plug-in hybrid completes the Sorento portfolio, which includes a combustion engine and a full hybrid that has already been presented. This combines a 1.6-litre turbo gasoline direct injection engine with a 44.2 kW electric motor and a 1.49 kWh small lithium-ion polymer battery. The overall system mobilizes 169 kW of power.

Volkswagen ID.4 reservations open this September in US