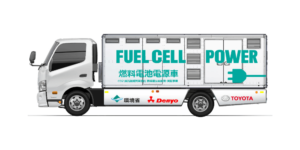 The fuel cell electric vehicle is based on Toyota’s lightweight Dyna truck and uses the same fuel cell system as the Mirai passenger car model. The integrated FC power supply system comes from Denyo. Around 65 kilograms of hydrogen supply the power for propulsion and power generation and the truck carries a total of 27 H2 tanks. Toyota intends to fill these tanks with hydrogen from renewable sources wherever possible.

The FC truck is to replace diesel vehicles and generators that have been used for such applications up to now. Denyo’s system is to supply energy for up to 72 hours using Toyota fuel cells. The water produced as a by-product of the fuel cell reaction could be used for other purposes on site, such as showers.

According to Toyota, the converted truck weighs 7.265 tons and is 6.38 metres long. The power supply capacity is given as 612 kWh, with a rated output of 8.5 kW (three-phase and single-phase). The use of all the hydrogen in the tanks should produce about 450 litres of water.

This month Toyota and Denyo plan to start a series of tests to determine the exact advantages of such fuel cell energy supply vehicles. The FC truck is to be tested against a conventional power generator when it comes to characteristics and suitability for everyday use. If the tests are successful, the vehicle will not remain a one-off: Toyota’s goal is to push for commercialisation to “drive a more sustainable, hydrogen-based society”.

The truck now on display was developed independently of a very similar project for which Toyota is working with Honda. It was only at the end of August that the two Japanese companies announced the Moving e project – a fuel cell bus from Toyota fitted with power output devices from Honda.

Three years of free charging for VW ID.4 in the USA

of buses in China are already electric. Five years ago this was 20%.