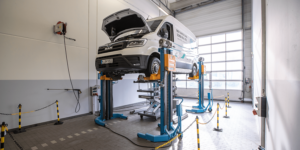 MAN Truck & Bus is preparing its European workshops for handling electric vehicles. The manufacturer is planning to equip a total of 110 service branches with the corresponding skills and tools by the end of 2020. A further 60 workshops are to follow by the end of 2021.

The preparation of the MAN workshops is taking place in three stages with a firmly defined depth of support: stage one includes experts who accompany the repair of high-voltage systems, stage two concerns workshops that specialise in e-mobility, and stage three involves individual workshops focusing on the repair of high-voltage storage systems, for example after accidents. The manufacturer has the whole of Europe in mind and is accordingly striving to “train a team of experts for work under voltage on energy storage systems for almost every European market”.

In principle, the development of expertise will initially start at locations where there is already a high volume of electric vehicles. “Although at the moment just a handful of electric MAN vehicles are operational within Europe, we have already started preparing our workshops with extensive measures for the new requirements of electric vehicles,” says Jan Eike Witt, Senior Vice President After Sales Management at MAN Truck & Bus.

The preparation of the workshops also includes the provision of special tools for handling high-voltage systems. In addition, selected MAN service partners are provided with at least two trained electrical specialists for vehicle technology. This ensures that experts are available in every conurbation who are not only trained in handling electric vehicles but are also able to repair them professionally, according to the Volkswagen subsidiary’s corporate headquarters.

The e-mobility concept for the workshops also takes into account the return, exchange and repair of batteries. However, due to the currently still small quantities and comparatively high costs, MAN does not plan to store or repair the batteries on-site, but rather to return them to the factory.

MAN’s electrical product range currently includes three models: While the electric transporter eTGE has been available in series production since the IAA Commercial Vehicles 2018, the Lion’s City E electric city bus has been tested at selected customers since the end of 2019 before mass production is scheduled to start in the fourth quarter of 2020. In addition, MAN has been producing its eTGM distribution truck in small series since the beginning of this year.