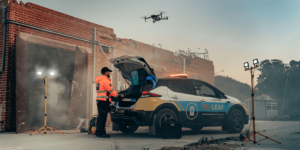 Nissan has developed a concept vehicle called Re-Leaf for mobile emergency power supply based on its Leaf electric model. Thanks to higher ground clearance and other modifications, the Re-Leaf can more easily access disaster areas.

The Re-Leaf uses the bidirectional charging capability of the production model. Externally mounted waterproof sockets along with a 230-volt socket in the boot, electrical devices can be connected directly to the vehicle’s battery. With mobile emergency electricity supply, medical equipment, communication media, lighting and other equipment can still operate even after a failure of the public power supply.

In the event of a disaster, it usually takes between 24 and 48 hours to restore power. In the meantime, the Re-Leaf should be able to operate several devices simultaneously. As examples, Nissan cites an electric jackhammer or a compressed air blower for clean-up work, a 10-litre soup kettle or an intensive care ventilator for supply or a floodlight.

The Re-Leaf has been extensively modified to enable access to disaster sites and to provide electricity for emergency supplies and reconstruction. To make progress on the rubble-covered roads, the regular Nissan Leaf was given extra ground clearance from 70 to 225 mm while the vehicle’s underbody has been fortified. The electric car’s track was widened (front 90 mm, rear 130 mm), 17-inch all-terrain tires from BF Goodrich were fitted and the wheel arches were adapted for the off-road tires and the wider track.

In the interior, the rear seats have been removed and the floor flattened to create additional storage space – behind the front seats there is also a partition wall to the newly created cargo area. In the target area, it should be possible to pull out a tailor-made walking table from the trunk, which with its 32-inch screen will serve as a control and communication centre.

The vehicle itself is only a concept for demonstration purposes, but according to Nissan the technology is intended for actual use and can be implemented in this form. With the name Re-Leaf, the Japanese are alluding to three factors that are important in the event of a disaster: rapid response, recovery and future resilience.

While California is currently in the throes of suffering numerous grid outages during catastrophic forest fires, Nissan highlights the fact that natural disasters are the biggest cause of power outages. In the last month, two other companies from the earthquake-prone Japan have presented concepts for emergency power relief in such situations.

Only last week Toyota and Denyo showed a hydrogen fuel cell truck they have developed for mobile emergency power in natural disasters or, for example, open-air concerts. In August, Toyota and Honda revealed they are already testing a hydrogen fuel cell bus for the same purpose. The two main differences to the Re-Leaf are of course due to the size of the vehicles and the generation capacity.

Here Nissan points not only to this specially developed vehicle, but also the newer Nissan Leaf e+ electric car for emergency power supply. The regular Leaf model can not only draw power to recharge the high-capacity battery, but also deliver it back to the grid through Vehicle-to-Grid technology, or directly to electric devices through V2X (Vehicle-to-everything). Nissan says that with a fully charged 62 kilowatt-hour battery the latest generation Nissan Leaf e+ can provide enough electricity to power the average European household for six days.

Helen Perry, head of electric passenger cars and infrastructure for Nissan in Europe says: “Electric vehicles are emerging as one of the technologies that can improve resilience in the power sector.” She explained: “By having thousands of EVs available on standby, either as disaster support vehicles or plugged into the network through Vehicle-to-Grid, they’re uniquely capable of creating a virtual power plant to maintain a supply of energy. The Japanese company said that in Japan, the Leaf has been used to provide emergency power and transportation following natural disasters since 2011. The purpose-built Re-Leaf can power multiple devices simultaneously.