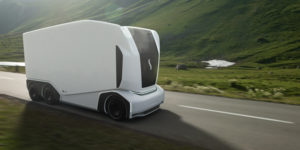 Einride announces the market launch of its next-gen electric truck. The vehicle, which is intended exclusively for autonomous operation and therefore no longer has a driver’s cab, is more aerodynamic and functional in the new version, according to the company.

At the same time, the design of the T-Pod has been modified to make it suitable for large-scale production and commercialization. Specifically, rounded edges for more aerodynamics and front and rear lighting are mentioned as design elements that are as functional as they are characteristic.

Unlike autonomous or semi-autonomous vehicles, which are classified according to the SAE J3016 standard with autonomy levels between 0 and 5, Einride uses its own classification model. As a reason, the Swedish company claims that “these standards are based on a certain degree of human operation as a starting point”. However, the Pod has no driver’s cab at all, it is a new category of vehicle. Einride speaks of AET, which stands for Autonomous Electric Transport.

Einride’s proprietary AET classification system ranges from level 1 to 5, with models in levels 1 to 4 available for pre-order now. AET 1 is suitable for closed areas with predetermined routes. AET 2 is also designed for company premises but additionally offers the possibility to use public roads between destinations over short distances. “Both AET 1 and AET 2 pods are now available for reservation and will be delivered to customers starting next year”, Einride announces.


AET 3 will then already allow operation on secondary roads and less busy main roads between several locations at a maximum speed of 45 km/h. AET 4 finally includes fully autonomous operation on freeways and other main roads at speeds of up to 85 km/h. According to the manufacturer, stages 3 and 4 can be pre-ordered and will be delivered in 2022 and 2023.

A deposit of $10,000 (divided into two payments of $1,500 and $8,500) is required when making a reservation on the Einride website. Subsequently a subscription model is taken, ranging from $18,000 and $19,000 monthly for AET 1 and AET 2 to $20,000 and $22,500 monthly for AET 3 and AET 4. According to the manufacturer, the subscription fee includes not only the vehicle but also access to the Einride mobility platform, which coordinates and operates the pods under the supervision of certified remote operators. The subscription fee may vary depending on the individual application, the start-up adds.

Einride names Lidl Sweden and Oatly, a Swedish producer of dairy products, as its first customers. Both companies were already cooperation partners in the testing of the first generation of vehicles. Other customers include Bridgestone and Northvolt.

Einride first presented the T-Pod in 2017. The vehicle, which weighs up to 26 tonnes, navigates using to six cameras, four radar systems, four infrared detectors and two antennas that locate the vehicle’s location with an accuracy of 20 millimetres. The electric truck has space for 15 euro pallets. A 280-kWh battery on board will guarantee a range of 200 km. Since no new performance data are mentioned in the current press release, these key data should still be correct.

In the old version, the T-Pod was tested at various customers in Sweden. Only in one case did the vehicle receive approval for public road transport: German logistics group DB Schenker has been allowed to use the electric truck on a public road for a limited period of time since May 2019. However, the approval, which is valid until the end of 2020, stipulates that the T-Pod may only travel at five km/h, that the permit is only valid for a specific public road in an industrial area, and that one employee per vehicle is assigned as a supervisor who can intervene from a distance using a joystick in the event of problems.

With the new generation of vehicles, Einride intends to make significant progress in this respect. Helpful in this respect: The start-up company is reporting new capital income parallel to the market launch of the new truck generation – namely 10 million US dollars from existing investors.