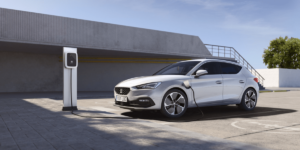 The Spanish Volkswagen subsidiary Seat has released their debut plug-in hybrid electric vehicle, the Leon e-Hybrid in the UK. The PHEV is now available to order at prices starting from £30,970.

The partly electric car was first announced in 2018, and the presentation of the series version of the plug-in hybrid Leon followed earlier that year, all according to plan. At the time, Seat said that the hybrid would feature a system output of 150 kW and combine a 1.4-litre four-cylinder gasoline engine with an electric motor and a 13-kWh battery. This was expected to provide an electric range of around 60 kilometres.

These promises almost came true as Seat now reveals a 36-mile EV range (58 km), combined with CO2 emissions of 27g/km. Charging of the 13kWh lithium-ion battery back is done via a 3.6kW AC inlet. Charging from 0 per cent to a full charge takes “less than 4 hours”.

Leon PHEV drivetrain is available in FR, FR Sport, Xcellence, Xcellence Lux and First Edition trims. Seat has also announced the introduction of their mild-hybrid 1.0-litre eTSI engine. “This drivetrain offers 110PS and is available exclusively with a DSG gearbox across all trim levels.”

The new plug-in hybrid Leon was designed and developed and will be built at SEAT’s facilities in Martorell, Barcelona.