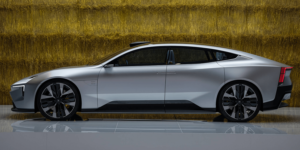 Geely plans to build a new plant in the Chinese city of Chongqing, where electric cars will be produced for the Polestar brand. The new plant is reported to plan production capacities for “30,000 premium electric vehicles” annually.

The targeted production numbers were reported by Reuters with reference to two people with direct knowledge of the matter. Neither Geely nor Polestar would comment on the plans for the plant in the megacity in the centre of China. According to the news agency, the already confirmed series version of the Precept study presented at the beginning of the year is to roll off the production line at the new plant in China.

In an interview with the German publication Automobilwoche, the CEO of Polestar, Thomas Ingenlath said: “We are building a new plant in China that will operate in a climate-neutral manner. It will be a benchmark for sustainable production for the entire industry.”

The Polestar 1 is currently being manufactured in Chengdu, northwest of Chongqing. When production of the PHEV coupe has ceased, this plant will build the Polestar 3, an electric SUV planned for 2021, according to earlier reports. The Polestar 2 electric sedan will be manufactured at a plant in Luqiao, south of Shanghai.

According to Ingenlath, the Precept – although it is most likely not the name of the later production model – is “pure Polestar”. “Our first models, Polestar 1 and Polestar 2, were still cars that we had launched as Volvo concepts,” says the German CEO. He said that with the Precept, Polestar has “completely different goals with this car”.

The Precept is the concept of an electric touring sedan that Polestar presented virtually after the cancellation of the Geneva Motor Show. While Polestar 1 and 2 still fit in well with Volvo’s design language, which was influenced by former Volvo chief designer Ingenlath, the Precept picks up some of the elements but is visually more independent. Polestar has not yet made any statements about the Precept’s drive system.

Geely includes Volvo Cars, Polestar, the British sports car brand Lotus and a 9.7 per cent stake in Daimler. According to Reuters, Geely is planning another factory in China, where SUVs from the Lotus brand will be produced. Until now, the British company has been manufacturing its sports cars exclusively at the Hethel headquarters in England.