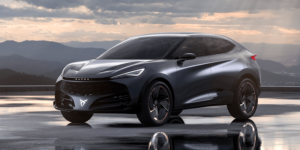 Seat is developing a production version of the purely electric concept car Cupra Tavascan. This was hinted at by the new brand boss Wayne Griffiths in an interview in which he described the all-electric SUV coupe as “our dream car”. Seat is also considering a small electric car based on MEB.

Griffiths has been Seat’s new CEO for the past three weeks. At the same time, the 54-year-old continues in his position as CEO of the Seat brand Cupra and Seat sales manager. He told the German trade publication Automobilwoche that his company is continuing to work on the Cupra Tavascan to make “this dream come true”. He believes that this car is very important for Cupra and therefore also for Seat. That sounds like plans for series production. Cupra presented the Tavascan study at the IAA 2019 in Frankfurt, among other places.

Griffiths also said in an interview that he could “imagine a small electric car based on MEB technology below the el-Born”. Although the company has a small-format electric car in its range with the purely electric Mii electric, the small car is currently no longer available for order, like Volkswagen’s sister models VW e-Up and Škoda Citigo e iV, with which the Mii shares the technology. Nevertheless, a spokesperson for Seat Germany confirmed to our German colleagues at electrive.net that the Mii electric will be available for order again from 2021. With the Škoda Citigo e iV, the end is final, with the VW e-Up things are still up in the air.

The el-Born is Seat’s first electric model based on the MEB Group platform. At the Geneva Motor Show 2019, the Spanish company presented it as a counterpart to the VW ID.3, when it was still a study. This summer, the VW subsidiary decided that the el-Born 2021 would be launched as a Cupra model. The new head of the company now explains that the decision was well thought out and that they had come to the conclusion that the vehicle would actually fit very well with Cupra. “We then reworked and further developed the vehicle considerably, including the chassis. In terms of performance, this is a real Cupra. And we want to show that electrification and sportiness go well together”. Despite being renamed Cupra el-Born, the car is to be built by VW at the MEB plant in Zwickau – but not until 2021. According to the original plans, the Seat el-Born was to be launched this year.

Bentley eyed-up for position under Audi