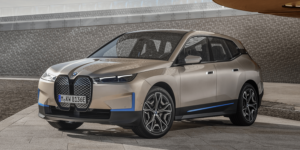 BMW presents the series design of its concept BMW iNext, which buyers will know as the BMW iX once the all-electric car rolls off the lines next year. And, the design the company put on digital display today is recognisable if not polarising. There is also news on technology.

The Munich-based manufacturer said it themselves today – there is still a year to go before the BMW iX will see the light of the showrooms. So what has been on show in the virtual #NextGen event today, was “a first look ahead to the future BMW iX, which is currently still in the series development phase.”

“The BMW iX is the first model based on a new, modular, scalable future toolkit developed by the BMW Group and focused on a fresh interpretation of design, sustainability, driving pleasure, versatility and luxury,” the company continues.

Note that this “future toolkit” is not the same as BMW’s just announced dedicated platform for electric cars. While the BMW iNext as a concept and its production version BMW iX were visions of electric driving at the start, the company has since moved on. The iX does not utilise the CLAR platform (e.g. 4-series/i4) either, which allows multiple drive types. So, the BMW iX will remain a one-off on its all-electric platform since BMW will introduce a series of various electric vehicles from 2025 on the said new platform.

BMW still consider the iX as “the first representative of a trailblazing generation of cars” designed to from the inside out – meaning with drivers in mind who may benefit from automated driving and connectivity as well as electrification. The company repeated today the iNext or BMW iX to remain a “technology flagship”.

“We are setting new industry standards with the technology in the BMW iX. The iX has more computing power for data processing and more powerful sensor technology than the newest vehicles in our current line-up, is 5G-capable, will be given new and improved automated driving and parking functions and uses the high-performing fifth generation of our electric drive system,” says Frank Weber, Member of the Board of Management of BMW AG, Development.

While BMW speaks of “recent calculations based on the car’s current stage of development” and therefore of preliminary performance data, they estimate a maximum output of more than 370 kW/500 hp – enough to power the BMW iX from 0 to 100 km/h (62 mph) in under 5.0 seconds.

At the same time, BMW targets an “exceptionally low combined electric power consumption” – in the e-SUV segment – of less than 21 kWh per 100 kilometres (62 miles) in WLTP. A battery with a gross energy content of more than 100 kWh claims a range of over 600 kilometres. Again that is an estimate based on WLTP and BMW reckons this equivalent to 300 miles in EPA measures.

In terms of charging power, BMW promises up to 200 kW at a DC charging station and says the charging process from 10 to 80 per cent should take 40 minutes.

Looking at this data, our German-focused colleagues added a few estimates of their own regarding charge curves. Assuming a net capacity of 95 kWh, charging from 10 to 80 per cent would correspond to an energy quantity of 66.5 kWh. With a charging time of 40 minutes, this results in an average charging capacity of precisely 100 kW. In other words, if the iX is charging at ten per cent state-of-charge with the maximum 200 kW, BMW would have to regulate charging power quite early if the average charging power is 100 kW. Of course, we can only make precise statements once the vehicle was charged under various conditions in practice. Even if the assumed net capacity is a few kilowatt-hours off and the charging time until the start of series production still improves by a few minutes, the BMW iX seems a long way from the almost straight charging curve of a BMW i3 or Audi e-tron quattro, which remains steep up to 80 per cent SoC.

While this remains to be figured once the iX hits the roads and charge stops in real life, the company confidently stresses that the power unit, including the battery, has been manufactured sustainably without the use of critical raw materials known as rare earth.

The same seems to go for the concept and design of the BMW iX which BMW says were “rooted in an all-embracing approach to sustainability”. Optimised aerodynamics, lightweight design through an aluminium spaceframe and so-called Carbon Cage and extensive use of natural and recycled materials made it onto the list.

We may spare you some of BMW’s press talk here, not the least because you can see for yourself. At the same time, we noted that the company still speaks of the classic kidney grille. It is, of course, front and centre and yet more nostalgia than necessary if not obsolete. As BMW admits, the electric drive system of the BMW iX “requires only a small amount of cooling air” so that the kidney grille is “completely blanked off”. Its new reason for being is now entirely digital as it functions as an “intelligence panel”. Behind a transparent surface, the grille holds camera technology, radar functions and other sensors for the aforementioned automated driving features.

BMW is calling the integration “shy tech” meaning other cameras and sensors are likewise positioned discreetly. The door openers are “flush” and answer to the push of a button and BMW is proud to have reutilised the logos to conceal the filler neck for the windscreen washer fluid or the rear-view camera.

While the interior repeats BMW’s claimed minimalist approach (some may find it bordering on bland) it is designed for spaciousness. A large panoramic glass roof covers all five seats of the BMW iX cabin and lends a “lounge-like ambience,” BMW hopes. They also mention the shy tech again, this time for features such as integrated speakers or “intricately styled air vents” and heated surfaces.

Even the Head-Up Display’s projector “discreetly recesses” into the instrument panel, according to the designers. The curved display consists of a 12.3″ monitor for the digital instrument cluster and a 14.9″ curved touchscreen for infotainment. The monitors will run the “next-generation BMW Operating System”.

BMW is currently preparing the plant in Dingolfing to start series production of the BMW iX for market entry in late 2021. Customers in the US will have to be a little more patient: Even though global production will begin in July 2021, BMW will deliver US production slots later in the year. This means it is most realistic to expect the first BMW iX units to get to the US in early 2022.