The US Department of Energy (DOE) released its Hydrogen Program Plan to provide a strategic framework for the Department’s hydrogen research, development, and demonstration (RD&D) activities. In transport, the Hydrogen Plan focuses on hard-to-decarbonise sectors such as aviation, heavy-duty transport and marine applications.

Previous versions mainly correspond to the 2006 Hydrogen Posture Plan and the 2011 DOE Hydrogen and Fuel Cells Program Plan. The original ‘Posture Plan’ was issued in 2004.

The new report begins by establishing a baseline for the uses and benefits of current hydrogen technology. Here, the report says that priority is to be put on hard-to-decarbonise sectors, such as long-haul heavy-duty trucks, medium- and heavy-duty vehicles that require longer driving ranges, involve heavy loads or demand faster refuelling times than exclusively battery-electric vehicles.

Beyond hydrogen fuel cell technology, the production of synthetic fuels with hydrogen is conisdered important in this regard since the existing liquid-fuel infrastructure can be used for to decarbonise sectors such as long-distance commercial air craft.

In the marine sector, hydrogen carriers are seen as an attractive alternative to bunker fuel in this similarly hard to decarbonise sector due to vast distances and heavy loads. Futher marine applications are also envisaged such as at ports for drayage trucks, shore power and cargo equipment. Rail and off-road transport such as in mining are also seen as being advantageous with hydrogen technology.

Aside from transport and industrial use, an interesting point of note is the use for grid stabilization, using hydrogen reserves as a “responsive load”. 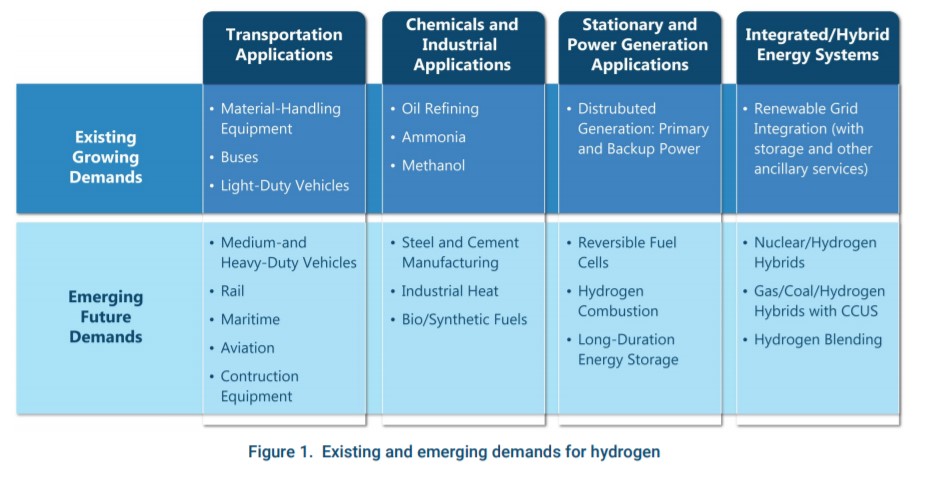 Cooperation between government agencies is also included in the plan, as the DOE Hydrogen Program is a “coordinated Departmental effort to advance the affordable production, transport, storage, and use of hydrogen across different sectors of the economy”. Participation from the Offices of Energy Efficiency and Renewable Energy, Fossil Energy, Nuclear Energy, Electricity, Science, and the Advanced Research Projects Agency-Energy (ARPA-E) are also a part of the plan.

Key goals of the current hydrogen include a target price of $2/kg for hydrogen production and $2/kg for delivery and dispensing for transportation applications. Furthermore, Fuel cell system cost of $80/kW with 25,000-hour durability for long-haul heavy-duty trucks is to be achieved. A rate of onboard vehicular hydrogen storage at $8/kWh, 2.2 kWh/kg and 1.7 kWh/l is also envisioned.

A need for further education among the workforce was also identified, and the plan demands “Educational resources and training programs for diverse stakeholders including first responders, code officials, and technicians”. The current state of technology is also mentioned, and provisions were made to adapt the plan as technology progresses. 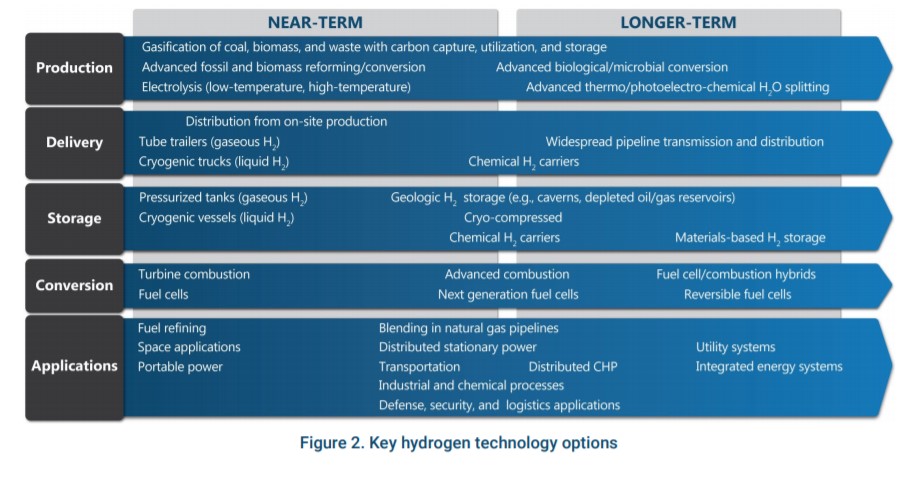 While the plan lays the groundwork for a fully functioning hydrogen economy encompassing several industrial and public uses, the plan does require a retooling of the energy system in the USA. It estimates that about 10 million metric tonnes of hydrogen would be needed to completely run the energy economy, which is currently not yet achievable. However, the plan does not entail the entire work being done by the government agencies. Only the groundwork is to be laid, at which point then the private sector is expected to take an increasingly large role starting in 2030.