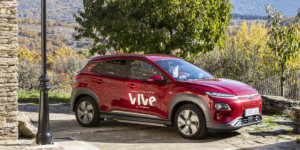 About a year ago, Hyundai introduced an e-car sharing service for Spain under the VIVe label. Following the success of the pilot project in the village of Campisábalos, Hyundai is now rolling out the service nationwide.

The expansion follows a successful test run in the small town of Campisábalos in the province of Guadalajara with 52 inhabitants, where Hyundai tested the concept with a Kona Electric and an Ioniq at the end of October 2019.

As a first step, ten other towns have already joined the initiative, including La Hiruela in the mountains of Madrid. The 70 inhabitants of the village already have a Hyundai Kona at their disposal. In the coming weeks, other municipalities in Andalusia, Castilla-La Mancha, Castilla y León, Extremadura, the Balearic Islands and Madrid are to be added. Any city with less than 10,000 inhabitants can apply for VIVe at the nearest Hyundai dealer. The dealer network is responsible for setting up charging stations in the villages, supporting the implementation of the concept and providing other services.

Car-sharing is free of charge for the first three months, after which it becomes a chargeable service. Residents with a driver’s license can book and unlock the cars via an app. Driving within a radius of 150 kilometres is permitted. “Aware of the difficulties and limitations in some rural areas in Spain, a year ago we launched the first rural and electric carsharing in Campisábalos, Guadalajara,” says Leopoldo Satrústegui, General Director of Hyundai Motor Spain. “The good reception this service has received has highlighted the need to continue committing to inclusive mobility and improving transport conditions in rural areas.”

Amsterdam’s GVB to procure up to 142 electric buses