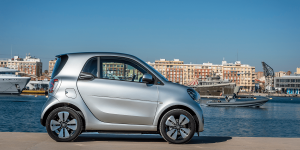 The Daimler Group has now officially confirmed that its plant in Hambach, France, is to be sold to Ineos. The British group will take over the plant in the coming weeks after final details have been clarified. A solution has been found for the production of the electric Smart.

After Daimler announced the sale of its plant in Hambach, France, in July, the future of the site has now been clarified. The chemicals group Ineos was considered a serious potential buyer for the plant at a very early stage, with the aim of building its own Grenadier off-road vehicle there. After several months of negotiations, the deal has now been announced, although, as Daimler has indicated, final details still need to be clarified.

Daimler has been producing the Smart two-seater in Hambach for years, and the four-seater will be built in Slovenia with the Renault Twingo. Since the combustion engine was discontinued at Smart, only the Smart EQ electric versions are produced in Hambach. This will remain so under the management of Ineos, as both companies have agreed that Ineos will continue to build the Smart for Daimler until the end of the model cycle. Daimler did not specify how long this will continue.

Daimler had contributed the Mercedes subsidiary Smart to a joint venture with the Chinese manufacturer and Daimler major shareholder Geely. The Smart brand will thus be further developed from China in the future, where the first next-generation electric models are to be built from 2022.

Daimler had originally announced its intention to build a compact electric car, presumably the EQB, in Hambach in addition to the Smart. Now that this project is no longer being realised, the part of the plant designated for the EQB is immediately available for Grenadier production. Ineos had recently announced a cooperation with Hyundai around fuel cells, the Grenadier could be built in a hydrogen version later on.

Daimler says that the cooperation of all parties involved has succeeded in securing employment at the site. A total of 1,300 employees will be employed by smart France S.A.S. and system partners at the site.

Buying the Hambach plant was a “unique opportunity that we simply could not ignore: to buy a modern automotive manufacturing facility with a world-class workforce,” says Ineos CEO James Ratcliffe, who is also the driver behind the vehicle project. “Ineos Automotive has the vision to build the best utility-driven SUV in the world. And in our new home in Hambach we will do exactly that”.