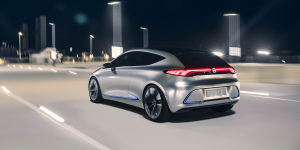 Daimler is planning to use the Smart factory in the French Hambach near the German border to construct a Mercedes compact model of the EQ brand, planning an investment of around 500 million euro.

The preparations for the new model construction in Hambach will begin shortly. Daimler has not announced a specific EQ model name, but we suspect that it is the EQA, which was presented at the IAA 2017. The Hambach factory has been producing the electric Smart Fortwo. Smart boss Dr Annette Winkler stated:  “We want to take advantage of the enormous expertise and prepare the plant for the production of an electric Mercedes-Benz.”

Before the announcement, Daimler CEO Dieter Zetsche met French president Emmanuel Macron in the Elysee palace in Paris. Daimler has close connections to the neighboring nation, and has been manufacturing in Hambach since 2012. The factory also receives all of its energy from renewable energy sources, and is thus entirely CO2 neutral, according to Daimler.

It has been known for some time that the EQC will be the first Mercedes EV under the EQ brand, and will be produced in Bremen. Shortly afterwards, the EQC will additionally be manufactured by BBAC in Beijing, the joint venture of Daimler and BAIC Motor. Further future manufacturing locations will include Rastatt, Sindelfingen and Tuscaloosa in the USA.

By 2022, Mercedes plans to have more than 10 EVs on the market across multiple vehicle segments., The company is calculating to have between 15 and 25% of their income from electrified vehicles by 2025.