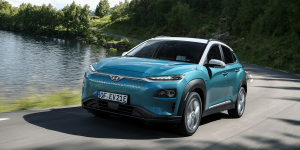 It looks like Hyundai is considering ceasing Kona Electric sales on the South Korean market following two recent recalls of the electric model. In Europe, sales of the Kona Electric will continue.

According to Reuters news agency, the development was cited in local media. In October, Hyundai recalled more than 25,000 all-electric Kona models in South Korea due to battery problems. Recently, the manufacturer also had to order more than 50,000 examples of the Kona Electric and fuel cell model Nexo to workshops in its home country due to faulty electronic braking systems.

Hyundai so far declined to confirm reports of a possible sales halt for the Kona Electric in South Korea, but told Reuters, “We are reviewing various options as we prepare to launch the Ioniq 5.” This is the South Korean company’s first electric car based on the new E-GMP platform, details of which were revealed by the Group just earlier this month. The Ioniq 5 based on the concept 45 vehicle will be equipped with an 800-volt system, among other features. Market launch is scheduled for 2021.

According to earlier reports, the Ioniq 5 will get two battery options of 58 and 73 kWh. At the presentation in early December, Hyundai did not give details on the range of battery capacities possible with the E-GMP when asked, although it is already clear that further Ioniq models will follow. Hyundai is making the previous model designation Ioniq its own sub-brand for future battery-electric vehicles based on the E-GMP with 800-volt technology.

For the German market, the model, which is now offered with a facelift, is built in two plants: While the 100 kW version with the 39.2 kWh battery continues to be imported from South Korea, the 150 kW models with 64 kWh battery for Europe are now coming off the production line at Hyundai’s Czech plant.

The background to the production stop for the South Korean market is, on the one hand, the battery problems with the electric model including a major recall and, on the other hand, the manufacturer’s increasing focus on the new 800-volt Ioniq 5 electric car.